‘The Key’ by Patricia Wentworth 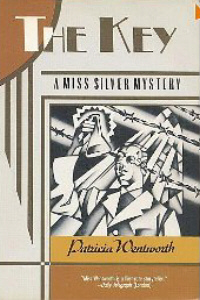 Set in the early 1940s, when the Second World War was at its height, The Key is a story of wartime endurance, patriotism, treachery, espionage and murder.

Michael Harsch is an Austrian Jew whose family were murdered by the Nazis.  He escaped to Britain, possessing nothing but his formidable intelligence and scientific knowledge.  He has spent three years devoting himself to the perfection of a powerful explosive that he hopes will help Britain win the war.  Harsch shares a house with a fellow scientist, Evan Madoc, a pacifist working on concentrated foodstuffs that he hopes will feed a world ravaged by war.  At last Michael Harsch informs the British authorities that his experiments are successful and he makes an appointment to hand over the papers.  That evening he goes to the church to play the organ, as he frequently does.  When he does not return, Madoc's secretary, Janice Meade goes to find him.  The church is locked and she has to ask the verger to open it with his key.  Together they find Michael Harsch lying dead, shot through the head, a pistol lying by his hand and his key to the church door in his pocket.

The verdict at the inquest declares that Michael Harsch felt that he had nothing to live for now that his work was complete and had committed suicide, but Janice Meade does not believe this.  Nor does Harsch's contact in Whitehall, who sends Major Garth Albany to make enquiries.  Garth soon realises that, if Harsch was murdered, the whole case hinges on who could get possession of one of the four keys that open the church door.  Garth uncovers evidence that indicates Evan Madoc had possession of a key and had a motive for killing Michael Harsch and, as Harsch's executor, Madoc has control of the explosives formula.  Garth sends for detectives from Scotland Yard and Madoc is arrested.

Janice and Garth are old friends, and Janice does not like Madoc, whom she regards as 'the rudest man in the world', but she cannot believe he murdered Michael Harsch.  She seeks the help of governess-turned-private investigator, Miss Maud Silver, who sets to work unravelling the crime.

The Key is the eighth book featuring Miss Silver.  One of the major delights of this book is the wealth of period detail and dialogue, expressed naturally because it was part of the fabric of the time.  In this way you get the picture of a time when you were only allowed five inches of bath water and efforts were made to keep up pre-war standards of life despite shortages and rationing.  'Florence says we are using a great deal more than our ration, but with tea you can always put in more water and make it go round like that.  I only wish you could do that with eggs - such a convenience.'  The Key has a deceptively simple but intriguing plot and a large number of endearing but mildly eccentric characters and, as in all Miss Silver books, a young couple who need help to sort out their romance.  The Key is well worth reading (or re-reading) by anyone who enjoys Golden Age mysteries.
------
Reviewer: Carol Westron