‘Danger at the Cove’ by Hannah Dennison 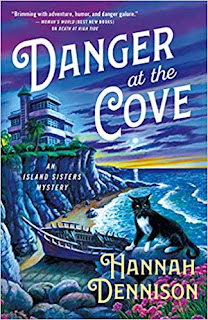 Following the death of her husband Robert, Evie Mead and her sister Margot, who has returned from Los Angeles after divorcing her husband Brian, have teamed up and leased the Tregarrick Rock Hotel in the Scilly Isles from Cador Ferris, heir to the Tregarrick Island Estate.  Cador left for Nassau 3 months ago and has remained silent ever since.  Part of the sisters’ agreement is repairs to the hotel – an agreement that is causing them great concern as more and more problems in the hotel come to light. An electrical fire in the kitchen has revealed that the 40-year-old wiring is not capable of supporting the new modern appliances. Their handy man- cum gardener Ollie is endeavouring to fix it, but he keeps uncovering further complications. A firm of electricians recommended by Vicar Bill, called Quick & Sons, seem to be misnamed! and the hotel opening date is looming.

When Margot’s friend Louise Vanderhoven arrives from Hollywood unannounced and expecting VIP treatment, Evie is not amused, but Margot tells her that Louise is devastated following the death of her husband, and as they are now way over budget, and Louise is a marketing Guru, she may be just what they need to put the hotel on the map.

The Tregarrick Rock hotel is a themed hotel. Each main suite being named after a mystery writer from the Golden Age. Evie, while keen to restore the hotel still wants to retain things as they have always been. However, Louise’s ideas are to bring Hollywood to the Scilly Isles, putting in a helipad, installing a spa and a five-star restaurant. Margot is all for it.

The tale abounds with interesting characters. The sisters have inherited the hotel Manager Dennis Simmonds who is a former marine obsessed with punctuality, the complete opposite to their handy-man Ollie who prefers to ‘go with the flow’, and Kim Winters, the super-efficient cook-cum-housekeeper.

What more could entice the reader, a lovely Art Deco hotel set on an island with spectacular scenery, and a shipwreck that it is rumoured contains long lost treasure, what else could be more exciting?  Oh! yes, the dead body of one of the hotel employees.

Who is dead? And who is the killer?

I have enjoyed all the seven books in the Honeychurch Hall series, and I am thrilled that there is an eighth book being published in November 2021. Meanwhile, as you wait for that one, enjoy this second book in the Island sisters’ mystery series. It is a ‘must read’ and is highly recommended.
-----
Reviewer: Lizzie Sirett 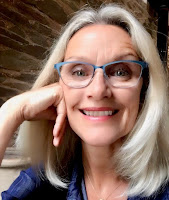 Hannah Dennison  was born and raised in Hampshire, but on leaving school landed a job as an obituary writer/amateur dramatic reviewer for a Devon newspaper. Hannah is the author of the Honeychurch Hall Mysteries and the Vicky Hill Mysteries, both set in Devon, England. She has been an obituary reporter, antique dealer, private jet flight attendant and Hollywood story analyst. Hannah originally moved to Los Angeles from England to pursue screenwriting.  Hannah is a member of Sisters in Crime, Mystery Writers of America, The Crime Writers Association, Mystery People, The Historic Houses Association, the National Trust and the Society for the Protection of Ancient Buildings. She enjoys hiking, horseback riding, skiing, theatre and seriously good chocolate.