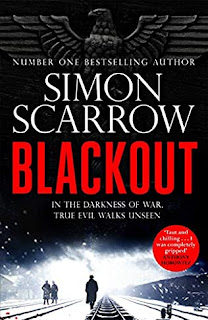 In December 1939 Berlin is placed under a rigidly enforced blackout.  Delight in the novelty of clear starlit skies soon fades as the grim realities of war and the desperate cold and lack of fuel add to the overall discomfort.  And the dark world develops its darker side.

A young woman and former film-star, Gerda Korzeny, is found brutally murdered near the railway track and Criminal Inspector Horst Schenke comes under pressure from his chief and various officers in the Nazi hierarchy to solve the case quickly.  Schenke is not a run-of-the –mill policeman –he had achieved some fame as a racing driver until an accident forced him to stop and left him with an injured leg.  He has, unusually, not become a member of the Nazi Party, which is a matter of note to his superiors and concern to some of his colleagues.  The responsibility of this case also means that he is being watched and given orders by a variety of people in different positions within the police and Nazi hierarchy.

Then another murder sets in trail an investigation which reveals a number of other possible murders.  The pressure is really on Schenke and his colleagues, especially as the evidence points to the possibility of a Party member being the culprit, but he refuses to be hustled and carefully picks through the sparse clues available.  He is given extra assistance in the form of Sergeant Otto Liebwitz, a graduate in Theology from Heidelberg University and currently working for the Gestapo on data analysis.  Schenke has his doubts about Liebwitz., but they develop an unlikely working relationship, helped by his realisation that Liebwitz has an good eye for detail and the willingness to work long hours.  The case moves forward when a woman survives an attack and is able to give a description of the attacker.

The role of the police in wartime is one that has been explored by other writers and this story provides its own take.  The plot makes good use of the atmosphere of the time, the cold, the underlying fear, the infighting between the various factions vying for supremacy within the Party, and the problems of the ordinary citizen who does not want to be involved in such matters.  Schenke himself has an unusual background and a girlfriend with connections.  His relationship with his colleagues is an interesting part of the story and the ultimate result of this story sets the stage for future novels.
------
Reviewer: Jo Hesslewood

Simon Scarrow is s a Sunday Times No. 1 bestselling author. His bestsellers include his historical novels featuring Roman soldiers Macro and Cato, as well as The Sword and the Scimitar, about the 1565 Siege of Malta, and four novels about the lives of the Duke of Wellington and Napoleon Bonaparte.  His two most recent books are thrillers. 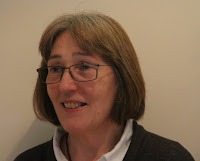 Jo Hesslewood.  Crime fiction has been my favourite reading material since as a teenager I first spotted Agatha Christie on the library bookshelves.  For twenty-five years the commute to and from London provided plenty of reading time.  I am fortunate to live in Cambridge, where my local crime fiction book club, Crimecrackers, meets at Heffers Bookshop .  I enjoy attending crime fiction events and currently organise events for the Margery Allingham Society.
Posted by Lizzie at 15:52