‘A Bullet In the Ballet’ by Caryl Brahms and SJ Simon 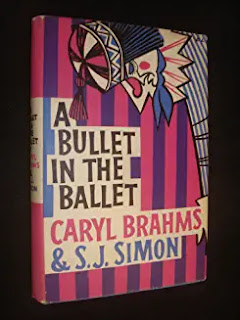 
A Bullet in the Ballet opens without any waste of time, in one of the most visually descriptive and direct beginnings of any crime novel: 'Since it is probable that any book flying a bullet in its title is going to produce a corpse sooner or later – here it is.

Dressed somewhat extravagantly in trousers of red and yellow check. Its white jumper is scalloped with scarlet and jade. It wears a yellow, bouffon wig, a Russian clown's hat and undertaker's gloves. It is bending over the top of a booth, its arms swinging limply over the sides. There is a neat little bullet hole in the centre of its forehead.

It died magnificently in the presence of two thousand people, most of whom had paid for their seats.

Petrouschka! And on this occasion none other than that famous dancer Anton Palook.'

Detective Inspector Adam Quill is a perfectly reputable Scotland Yard detective of the Golden Age, tall with 'fair hair, a good-humoured mouth, large capable hands and an unemotional manner. Not supernaturally intelligent but not naturally stupid, he started life as one of Lord Trenchard's young men and has only just managed to live this down, mainly by calling everybody in sight “Sir.”' In his first case Quill went with overwhelming evidence and arrested the wrong man, a mistake he does not intend to make again.

When he is summoned to investigate the shooting of Anton Palook, a lead dancer with the Stroganoff company, who died at the climax of Petrouschka, Quill does not foresee any great difficulties: 'As likely as not, he reflected, he would be greeted by some hysterical young woman already in the throes of repentance.' Instead he is sucked into the chaotic world of ballet; every cliché is there, including the ludicrously altered names to make them sound Russian, like Ernest Smithsky 'who mimed his way so conscientiously through Lac des Cynes.' (This is a subtle cliché within a cliché, as it plays on the belief current at the time that British male dancers were vastly inferior to their Russian counterparts.)

There is the balleto-medico, the devoted, jealous dresser; and the domineering, ambitious mothers of ballerinas, determined that their daughters will achieve centre stage.  There is Nevajno, the innovative young choreographer who creates truly horrible ballets. 'But the show must go on. This is unfortunate as the next ballet is by that advanced young choreographer Nevajano, and depicts Ajax laboriously wrestling with the lightening to Tchaikovsky's 1812.'  Also there is Arenskaya, the old ballerina, now teaching others and glorying in her memories of successes both on the stage and off. '”But of course,” agreed Arenskaya. “Me – I will tell them how cleverly I seduce Anton ten years ago.”

“Mais c'etait tres interessant,” protested Arenskaya. “Palook, he did not want. He mauvais sujet. Havelock Ellis he have a chapter about it.”'

One thing unites Stroganoff's company: their belief that ballet is the only thing that matters. Quill discovers this when he realises that Stroganoff has removed Palook's body to his dressing room.

'Quill looked up sharply. “I thought he was shot on the stage.”

“Mais naturellement,” said Stroganoff, appearing even more puzzled than before. “You cannot have a body in Ajax and anyway the décor, it is different.”'

Against the odds, Quill struggles to introduce some police procedure into the investigation. 'Quill nodded

“Mais naturellement,” said Stroganoff, appearing even more puzzled than before. “You cannot have a body in Ajax and anyway the décor, it is different.”'

Against the odds, Quill struggles to introduce some police procedure into the investigation. 'Quill nodded and the body was duly carried out, though not without a howl of protest from Stroganoff, who argued that he needed the corpse's costume for the next presentation.'

The police are welcomed hospitably by the company; indeed Quill soon feels as if he is drowning in Russian Tea. As Quill struggles to discover the murderer, Stroganoff is desperately deciding which male dancer will replace Palook in Petroushka for the Gala performance in front of the great Benois himself, ('if 'e come.') Then the killer strikes again.

Brahms and Simon take the conventions of the Golden Age mystery and turn them into something completely different. They play fair and plant clues, but the mystery is always subordinate to the outrageous characters and ludicrous situations that fill every page. The young 'romantic leads' (in this case the young lead dancer Kasha Renevsky and the ballerina Rubinska) have no great importance in the book. It is Stroganoff who dominates with Quill doggedly providing the stability amongst the chaos. It is clear the authors had great fun in writing A Bullet in the Ballet and it is still great fun to read.

Unfortunately none of the Brahms and Simon crime books are currently in print or available on Kindle. However, they are all available second-hand.
--------
Reviewer: Carol Westron