N or M? By Agatha Christie 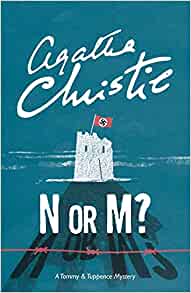 It is spring 1940 and Britain is at war with Germany.  It is twenty years since Tommy and Tuppence Beresford were the Young Adventurers tracking down spies and criminals (The Secret Adversary and Partners In Crime.)  Now in their mid-forties, both of them are apparently superfluous to the war effort and both hate sitting on the sidelines, worrying about their two grown up children, Derek and Deborah.  Out of the blue, Mr Grant of the Secret Service turns up and offers Tommy a vital and dangerous job in which his amateur status is an advantage.  Unknown to those in power, many of whom are secret Nazi sympathisers, he is to go in secret to a south coast resort and stay in a small hotel, Sans Souci,  and attempt to identify a German agent who is attempting to set up the Fifth Column, the 'Enemy Within,' in Britain.  This could be either a male agent known only as 'M' or a woman known as 'N.'

Mr Grant insists that Tuppence is kept in the dark about Tommy's new job, and is merely told that he is going to Scotland to work in a dull Government office with restricted access.

'But you feel you ought to go,' murmured Tuppence reminiscently.

'After all,' said Tommy feebly, 'you can knit, you know.'

Seizing her balaclava helmet she flung it on the ground.  'I hate khaki wool,' said Tuppence, 'and navy wool and Air Force blue.  I should like to knit something magenta!'

However Tuppence is a clever and observant woman, who suspects Mr Grant's deception and has no intention of being sidelined.  When Tommy, under his cover name of Mr Meadowes, arrives at Sans Souci one of the first residents he encounters is his wife, masquerading as Mrs Blenkensop, knitting and gossiping with his suspects.  When Mr Grant is informed of this, he has to admit that Tuppence is an ally worth having and from then on this adventure, as previous ones, is a Joint Venture.

At first it seems impossible to believe that any of the harmless if irritating inhabitants of Sans Souci could be a foreign spy.  In fact the only suspicious character is the one they both like best, a young German refugee.  But then dramatic events occur, with an inexplicable kidnapping and a rescue that ends in tragedy. As the danger grows more intense Tommy and Tuppence have to carry on in their attempts to unmask the German secret agent and discover the codebook that will reveal the identity of the people in high Government positions who intend to aid the invasion of Britain.

N or M? was published in 1941, at a time when the outcome of the War was still very much in doubt.  It is Christie at her best, mixing adventure and detection with humour and lively relationships and, at the heart of it, the fate of war torn Britain.
-----
Reviewer: Carol Westron