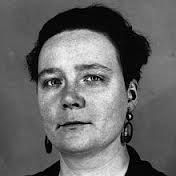 Dorothy Leigh Sayers was born in 1893, at the Head Master's House, Christ Church Cathedral, Oxford.  Her father was chaplain of Christ Church and headmaster of the Choir School.  Sayers was an only child and her father started to teach her Latin when she was only six years old.  The Rev. Henry Sayers' influence is clearly visible on his daughter's later work, when she depicted her detective hero, Lord Peter Wimsey as an outstanding musician and fluent in Latin.  Indeed the climax of the long courtship between Lord Peter and Harriet Vane concludes in Gaudy Night with two simple Latin phrases.  'Placetne, magistra?'… 'Placet.'

Sayers was brought up in an elegant rectory in a small village in Huntingdonshire.  Many of the characters in The Nine Tailors have been named from gravestones in the graveyard, and the proximity of the River Ouse and the Fens may well have contributed to Sayers' description of the floods in The Nine Tailors.

In 1912 she won a scholarship to Somerville College, Oxford.  She studied modern languages and medieval literature and finished with First-Class Honours in 1915.  At this time women could not be awarded degrees but when the position changed in 1920, Sayers was amongst the first women to be awarded a degree.  Her experiences at Oxford and the on-going debate about whether education was appropriate for women informed her attitude in her penultimate Peter Wimsey novel, Gaudy Night.

In 1916, Sayers' first book of poetry was published by Blackwell.  She later worked for Blackwell and also, before the First World War, worked as a teacher both in Britain and in France.  From 1922 to 1931 Sayers worked as a copywriter at a London advertising agency.  She was a successful advertiser and is credited with the slogan, 'It pays to advertise.'  She based her novel Murder Must Advertise (1933) upon her experiences at this time.

Sayers' first Lord Peter Wimsey novel, Whose Body?' was published in 1923.  Wimsey is the younger son of a Duke and immensely rich, which means he is able, with the assistance of his manservant, Bunter, to indulge his hobbies, including that of investigating crimes. Sayers once commented that Wimsey was a cross between Fred Astaire and Bertie Wooster but, beneath his camouflage of casual banter, she also portrayed him as a musician, scholar; linguist, connoisseur of fine wines, collector of rare books and manuscripts and many other skills, as well as being an accomplished lover.  He was also a man tortured by the memories of the time he had spent as an officer in the trenches during World War I.

In Strong Poison (1930) Sayers introduces detective novelist Harriet Vane, on trial for murdering her lover.  'There were crimson roses on the bench; they looked like splashes of blood.  The judge… did not look at the prisoner as he gathered his notes into a neat sheaf and turned to address the jury, but the prisoner looked at him.  Her eyes, like dark smudges under the heavy square brows, seemed equally without fear and without hope.'  Sayers frequently claimed that she brought in Harriet as a means of destroying the public interest in Wimsey via matrimony.  However when she created Harriet, with her fierce intelligence and even fiercer pride, she was producing a heroine that had a great deal in common with Sayers herself and even gave her a similar academic background to her own Certainly after Strong Poison, Sayers found herself unable to get rid of Wimsey for another six novels and in three of them (Have His Carcase; Gaudy Night and Busman's Honeymoon) Harriet Vane plays a very central role.

Of all the Golden Age novelists, Sayers is the one who deals most faithfully with the effects of the First World War. Wimsey suffers from recurrent nightmares and a fear of responsibility.  The damage the War did to men's bodies and minds is a recurrent theme in the Wimsey novels and central in The Unpleasantness at the Bellonna Club (1928.) In 1935, Gaudy Night was published at a time when the evils of the Nazi doctrine were already clear to a politically intelligent observer.  Sayers uses the debate between the academics to attack the Nazi doctrine of 'Kinder, Kirche, Kuche.'

exultation as the faithful lover at last wins his lady.  However Sayers was persuaded by Muriel St Clare Byrne to collaborate in writing a stage play, Busman's Honeymoon (1937), which Sayers then turned into the book that is the final Wimsey novel.  In contrast to Gaudy Night, Busman's Honeymoon ends on a sombre note, as Wimsey and Harriet watch the dawn that will bring the execution of the murderer they have helped bring to justice.  However, Sayers' last portrayal of Wimsey and Harriet is much lighter.  In Talboys, the final short story featuring Wimsey, he is shown as a happily married man with three sons, enjoying the gentle exercise of detecting the villain who has stolen a neighbour's peaches the day before the Horticultural Show.

As well as Lord Peter, Sayers created one other detective that appeared in several short stories.  His name was Montague Egg and he was a salesman of wines and spirits.  In collaboration with Robert Eustace, Sayers wrote one stand-alone detective novel, The Documents In the Case (1930), which did not feature Lord Peter Wimsey. Sayers wrote other detective novels as a collaborative effort with other members of The Detection Club.  Sayers was a member of The Detection Club from the time it was set up in 1930 and was its president from 1949-1957.

Sayers was a committed Anglican Christian and wrote many religious books on Anglican doctrine, including The Mind of the Maker and Creed of Chaos.  She also wrote religious plays.  The Man Born to Be King was a play written for broadcasting in Children's Hour by the BBC.  It raised a storm of protest because Sayers portrayed Christ speaking in modern English. This revolutionised religious play-writing.

At heart Sayers remained an academic.  She translated classical works, including The Song of Roland and Dante's Divine Comedy but died unexpectedly of a heart attack while the third volume, Paradiso, was unfinished.  It was completed by her friend, Dr Barbara Reynolds.

As well as much praise for her detective novels, Sayers also attracted criticism.  She was accused of anti-Semitism, which she denied, and perhaps with more truth, she was accused of intellectual snobbery.  It was clear she expected her readers to be highly educated.  The solution of Clouds of Witness was revealed in a letter written in French and it was only after intervention from her publishers that Sayers agreed to include an English translation.

Sayers died in 1957 and, after her death, a secret from her youth was finally revealed.  When she was thirty, she had given birth to an illegitimate child, John Anthony, who was brought up by Sayers' aunt and cousin.  Sayers' husband, Mac Fleming, had died in 1950 and her son was the sole beneficiary under her will. It is impossible to know… but fascinating to speculate… what effect this deeply-held secret had on Sayers' writing, especially on her creation of the character of Harriet Vane.