‘A Good Death' by Elizabeth Ironside 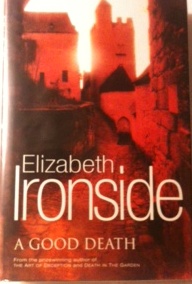 September 1944, and Theo de Cazalle who has spent the last four years fighting with the Free French, and only recently back in France, is returning from a meeting with the commissioner in Toulouse. On his journey back to Paris, starved of his homeland, he eagerly takes the opportunity to visit his home Bonnermort deep in the French countryside. His heart loosens with relief that the place is still there, although the wrought iron gates are shut secured by paddock and chain. Eventually he is admitted by Micheline, Henri's wife, but everything is changed. Henri shot, just three weeks ago. Her story tumbles out, the SS billeted on them since the beginning of June, the ambush, the executions, the German Officer found dead, naked as a pig in the courtyard.

And Madame? He asked, Micheline replies, she and the children are in the tower, the house hasn't been used since the Germans came. Arian, his wife, tall and elegant with a mask fixed to a skull shaved as a collaborator. Reeling from the shock, Theo de Cazelle sets out to discover the truth of the devastation of this tiny rural community.

From the opening chapter, the reader is plunged into mistrust, suspicion, betrayal and fear. Set in France at the close of the second world war, the atmosphere conveyed by Elizabeth Ironside is remarkable. Although, Bonnemont is portrayed as being relatively isolated, I found the descriptions of the location and the family to be strangely reminiscent of The Scapegoat by Daphne Du Maurier. There is the same interesting cast, the two aunts, in this case two children, Theo's own daughter, whose experiences in her convent school, give pause for thought, and a Jewish girl, brought by Arian to Bonnermort for safety. His wife Arian is very different from that of Jean de Gue's wife, but nevertheless as incommunicative. The schoolmaster, the Russian. The characterisation throughout the book is brilliant, and the writing is wonderful.

Apart from the mystery, surrounding the death of the German, the descriptions of life in rural France at this time are worth the reading. I read in a year, as I am sure do you all, many good books, but it seems that just once a year I find one book that stands out from all the rest, I suspect that this year’s book for me is A Good Death. I urge you all to read this book.

Elizabeth Ironside is the pseudonym of Lady Catherine Manning, wife of the British Ambassador to the U.S. Her first novel won Britain’s John Creasey Award for Best First Mystery of 1985, and Death in the Garden was nominated for Britain’s CWA Gold Dagger for Best Mystery of 1995. She has travelled widely and lived in Moscow and Tel Aviv. She now lives in London.