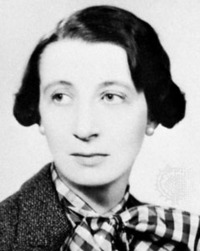 Tey was educated at the Royal Academy, Inverness.  Although, from an early age, she was passionate about writing, she was also passionate about gymnastics and physical education and taught in several schools and training colleges until, at the age of twenty-three, she returned home to nurse her dying mother and stayed at home to look after her invalid father.  Her knowledge of life in a physical education training college was put to good use in Miss Pym Disposes (1946), in which the distinctly non-athletic Miss Pym finds herself the guest lecturer in an obsessively dedicated College of Physical Education.  One of the most interesting aspects of this book is Tey's exploration of the psychological dangers of young and vulnerable people being encouraged to push themselves to the limit of their abilities.  Miss Pym has achieved some celebrity as an author and lecturer on popular psychology, especially regarding the ability to read people's characters by their faces; a belief that crops up frequently in Tey's work.  It is also interesting to note that, when working at a school in Oban, Tey suffered an accident similar to the one she used as a murder method in Miss Pym Disposes, although fortunately not with such catastrophic consequences.

During the late 1920s Tey published poems and short stories in Scottish newspapers and in the English Review.  Her first novel, The Man In the Queue, was published in 1929.  It was reportedly written in two weeks for a competition sponsored by the publisher Methuen.  The Man In the Queue was originally published under the pseudonym Gordon Daviot, although later publications of this book are under the pseudonym Josephine Tey, to match all her later mystery novels.  The Man In the Queue introduces Detective Inspector Alan Grant of Scotland Yard; a quiet, intelligent man, with his roots in Scotland.  He is well educated and has a passion for justice.  Grant believes it is possible to tell certain sorts of criminal tendencies from a person's face, a belief that is important in many of Tey's mysteries and becomes pivotal to the plot in her later novel, The Daughter of Time.  Like all good fictional detectives, Grant is supported by his faithful and admiring sergeant, Sergeant Williams.  In The Man In the Queue, Grant and his colleagues identify the man who stabbed a theatre-goer, standing in a queue, but tracking him down involves Grant in a wild chase across the Scottish countryside.  When he gets his man, Grant instinctively feels that all is not as simple as it seems, and despite the disapproval of his superiors, continues to investigate.

Tey's early production of mystery novels was slow and she showed a determination to explore other genres.  In 1929 she also published (as Gordon Daviot) Kif, a story of a young man's disintegration after the First World War and, in 1931 The Expensive Halo, a social comedy set in 1920s London.  In 1932 her first and most successful play, Richard of Bordeaux was first produced.  This starred Sir John Gielgud, who became a life long friend of Tey.  In 1934 two more plays by Tey were performed, The Laughing Woman and Queen of Scots.  The former was a failure but the latter, charting the relationship between Mary, Queen of Scots and Lord Bothwell, (with Laurence Olivier playing Bothwell) was quite successful.

It seems that, at this time, Tey was pursuing a career as a playwright in preference

to that of a mystery novelist.  However in 1936 she published A Shilling for Candles, the second Inspector Grant novel.  Grant investigates the murder of a young actress and, once again, has doubts about the guilt of the Prime Suspect and feels convinced the truth behind the crime is more complex than it appears.  A Shilling for Candles was adapted for Alfred Hitchcock's film, Young and Innocent.

After this time, Tey's mystery novels were published more frequently.  Miss Pym Disposes (1946) was a stand-alone novel, which did not feature Grant, but was indisputably set in the same time as the Grant novels.  The Franchise Affair (1948) was based on an eighteenth century true-life story of abduction, but Tey's interpretation of events in The Franchise Affair shows her insight into the psychology of crime.  The detective is a country solicitor who takes on the case of a middle-aged woman and her elderly mother when they are accused of abducting a young girl and imprisoning her to solve their need for a servant.  Inspector Grant appears only briefly, as the official arm of the Law, although by his demeanour it is clear where his sympathies lie.  Brat Farrar (1949) is another stand-alone novel.  It is set in the countryside that Tey loves and reveals her knowledge of horses and riding.  It tells the story of a young man who approaches the troubled Ashby family and claims to be the eldest son, Patrick, who had vanished years ago while still a boy.  Violence erupts when the young man attempts to claim his inheritance and the truth behind Patrick's disappearance is dark and cruel.  In To Love and Be Wise (1950) Grant reappears centre stage in a strange, atmospheric tale of love, obsession and revenge.

In 1951 Tey wrote the novel that was voted by the Crime Writers' Association in 1990 as the 'greatest mystery novel of all time'.  The Daughter of Time has become topical again in the past few weeks, with the discovery of Richard III's body in a Leicester car park and the controversy regarding where he should be buried and whether he should be given a State funeral.  In The Daughter of Time, Grant has injured his back in an accident and is forced to lie in bed.  When he encounters a picture of Richard III, Grant cannot believe he is a heartless murderer and starts his own historical investigation into the deaths of Richard's nephews, the Princes In the Tower.  In contrast to the previous Grant books, where he has been pursuing suspects in an active, physical way, in The Daughter of Time the whole action is set in Grant's hospital room.  It is a tribute to Tey's skill that, having set herself such restraints, she creates such a compelling mystery novel.

In 1952, as she was battling with the cancer that killed her, Tey published The Privateer, a romantic novel based on the life of the buccaneer, Henry Morgan.  After her death the manuscript of The Singing Sands was found amongst her papers and published in 1953.  It is the final Grant novel, in which the detective, heading home to Scotland for a much needed rest, is embroiled in an unexpected death.

Josephine Tey was a very shy and intensely private person and little is known about her personal life, although Sir John Gielgud suggested she had suffered a bereavement in the First World War. She enjoyed living in the country; fishing, playing golf and riding, and all of these hobbies appear in her books.  Compared with other Golden Age novelists, her output of mystery novels was very small; only eight in total.  However all of these are unique, psychologically intriguing and break new ground.  Like his creator, Grant's personal life is not opened up to close public scrutiny. The hallmark of the Grant novels is his willingness to reassess the evidence and fight against injustice, even when the accused has been dead for six hundred years; a characteristic it seems probable he shared with his creator.

Josephine Tey was passionate about her Scottish heritage and, on her death, left her money to the National Trust.  Interestingly, the actress victim in A Shilling for Candles had left the bulk of her fortune to the same cause.

To the last Tey preferred to be known as Gordon Daviot, playwright.  That she presented herself in this way is clear in this extract from her obituary in The New York Times, published on February 14, 1952.