‘Wolf at the Door’ by Sarah Hawkswood 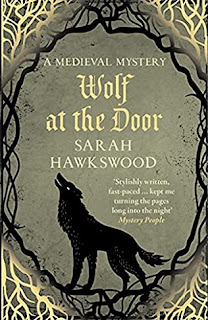 It is All Hallows’ Eve, 1144, and Durand Wuduweard, the Keeper of the King’s Forest of Feckenham, is discovered dead in his house. Durand was an arrogant, vicious man and none of the villagers mourn him, but they are all terrified by the manner of his death. He was discovered beside his hearth with his face savaged beyond recognition by a powerful animal with sharp, powerful teeth. Fears of a man-killing wolf, or worse a werewolf, strike terror into the villagers and they send for help to William de Beauchamp, Lord Sheriff of Worcestershire.

De Beauchamp’s second-in command is Hugh Bradecote, the undersheriff, but he is away at his own manor, anxiously awaiting the birth of his second child. Childbirth is a dangerous undertaking for even the wealthiest and most well-tended woman and Bradecote’s first wife had died following the birth of their son. Bradecote still feels guilty that he was not more supportive to his first wife; he adores his second wife and is appalled at the thought of losing her. The sheriff knows that he has to respond swiftly and decisively to the villagers’ plea for help and so he sends Catchpoll, his cynical but trustworthy sergeant, to investigate Durand Wuduweard’s death. From the start, Catchpoll is profoundly sceptical that Durand was killed by a wolf. This disbelief is increased when he is informed that the body was discovered by Durand’s son, William, a swindler with whom Catchpoll has had many dealings and whom he knows as William Swicol, which means Deceitful William. When Catchpoll views the scene of death he has to revise his opinion and admit it was probable that a wolf had been involved but his years of investigative experience tells him that it is not as simple as an attack by a wild wolf venturing into a domestic dwelling.

It soon becomes clear that the death of Durand is only the first move in a wave of violence that sweeps through the the Forest of Feckenham and its environs: travellers vanish, there are other attacks by the wild beast, and also arson, which damages dwellings belonging to both the wealthy and the poor. In a desperate attempt to regain control of his jurisdiction, de Beauchamp leads his hounds and huntsmen in an effort to track down the wolf, which, even if unsuccessful, he hopes will reassure the forest dwellers that he is taking action. At the same time, Hugh Bradecote is forced to leave his wife and join the sheriff’s other most trusted officers, Sergeant Catchpoll and Catchpoll’s apprentice, Walkelin, in order to follow the trail of a vicious band of outlaws who revel in destroying anybody, well-born or humble, young or old, who is unfortunate enough to have earned their malice.

Wolf at the Door is the ninth in the series featuring Bradecote and Catchpoll and it is a series that gets stronger all the time. The plot is complex and intriguing, and the historical detail is masterly, totally convincing and detailed, and wonderfully evocative of England in the 12th century. The characterisation is superb, with protagonists who develop with each novel and whose relationships grow stronger all the time; it is especially enjoyable to observe the development of Walkelin into an increasingly skilled investigator and a worthy part of the team. Wolf at the Door is a page-turner, which I thoroughly recommend for anyone who enjoys well written, immaculately researched, historical crime.
------
Reviewer:  Carol Westron