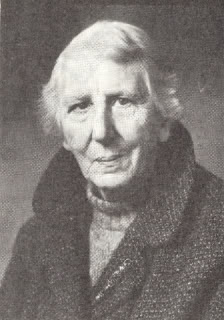 Gladys Maude Mitchell was born in Cowley, Oxfordshire on 19th April 1901 to Scottish-born parents. She attended schools in Brentford and Isleworth and, from an early age, was seen as an exceptionally bright and intelligent pupil. Whilst attending Goldsmiths College and later University
College London from 1919- 21 she decided to become a teacher and, soon after graduation, took up a post at a school in Brentford in Essex teaching History and English. It was later, after moving to St. Anne’s Senior Girls’ School in Ealing in 1925 that she began writing novels, whilst still working as teacher and also studying for, and gaining, a diploma in European History from University College.

London. Her first crime novel, entitled Speedy Death, was published in 1929 and introduced her character Mrs. Beatrice Adela Lestrange Bradley to the world of crime fiction. Beatrice, who was a psychoanalyst and author, was to appear in all of her 66 novels together with her charismatic assistant Laura Menzies and it was often believed that Beatrice was a mirror-image of Gladys herself, for she was a strong -minded young woman who did not shun controversy on many social and psychological issues of her day.

More novels followed, establishing her reputation as a stylish and clever crime writer and throughout the 1930’s she was considered to be one of the ‘Big Three’ female writers of the so-called ‘Golden Age of Crime Fiction’ alongside Agatha Christie and Dorothy L. Sayers. She was an early member of the Detection Club, the Crime Writers Association, Pen, and the Society of Authors. Always enthusiastic about education and sport, she was a member of the Middlesex Education Association as well as the British Olympic Association. It is certainly possible that today’s well-organised and exciting world-wide Olympic Games would have interested her immensely and certainly the 2011 Olympics in London; perhaps even more so, the remarkable achievements of the Paralympics in London 2011.

Gladys Mitchell wrote one novel a year and achieved a well-deserved reputation for clever plotting and characterisation. In later life, she studied the works of Sigmund Freud and her growing interest in witchcraft was encouraged by her fellow novelist and long-time friend Helen Simpson. Her plots and settings were usually unconventional and the subject of witchcraft, together with Freudian psychology, became a recurrent theme in her later novels.

In addition to her Bradley novels, this prolific author used the pseudonym of Stephen Hockaby for a series of historical novels, reflecting her interest in history, as well as a series of detective stories featuring an architect Timothy Herring - arising from her life-long interest in architecture - and for these, she used the pseudonym, Malcolm Torrie. She also wrote ten children’s books under her own name and whilst teaching English and History at the Matthew Arnold School in Staines, produced the annual school play until her retirement.

Gladys Mitchell never married and retired to Corfe Mullen in Dorset in 1961 where she continued to write until her death at the age of 82 on 27th July 1983. Although her work is largely neglected these days, she was feted throughout her lifetime and was once dubbed ’The Great Gladys’ by Philip Larkin. Everyone reading her crime novels could be certain of an absorbing read, stylishly written, with characterisation and plotting to challenge any of her contemporaries in the crime writing genre from 1930 until her death. 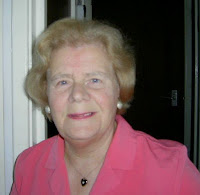 Edna Jones, who writes as Clare Dawson for her crime novels, has been writing since the 1970's. Using different pseudonyms, she has written short stories for several years, some commissioned, in the romance genre as well as stories for crime anthologies. She has produced articles on various and specific subjects for which she did her own research and also compiles crosswords for several publications. Her first crime novel Death in a Tranquil Place was published by Robert Hale in 1979. Her latest novel, Death by Invittion is on Amazon/Kindle. Current crime novel is in draft form. Hobbies are varied but travel, reading and outdoor life is most favoured.