‘The Great Shroud’ by Vera Morris 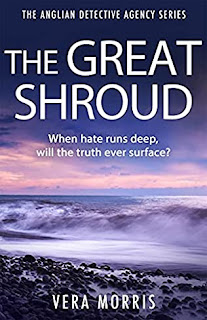 Published by Headline Accent,
19 August 2021.
ISBN: 978-1-4722-8366-5 (PB)The Anglian Detective Agency is back on the warpath – and this time it’s personal. Matt Grill, purveyor of the best fish and chips in Suffolk, fisherman, and son of Mabel, the detective agency’s cook-housekeeper, is found dead at the lifeboat station after a hoax call-out. On the surface it looks like a tragic accident, but Mabel is convinced her lad has been murdered. Unfortunately, not all her colleagues agree.

Meanwhile, ex-policemen Frank Diamond and Stuart Elderkin are investigating the theft of some valuable jewellery, and soon decide there is something fishy going on. And their detective inspector friend Nick Revie has a serial rapist and killer to track down. It’s left to former PE teacher Laurel Bowman, who has already earned her detective spurs, to pacify a distraught Mabel by promising to ask a few questions.

Soon the unlikely crew of private detectives are at odds. Mabel is too upset to keep them supplied with delicious meals, so the task falls to gardener Jim McFall, who proves an unexpected asset to the fractured team. Mabel’s husband Stuart feels obliged to support her, and Laurel decides Matt’s death is worth a closer look. Frank feels out on a limb, and Dorothy, former school secretary and now the agency’s administrator, doesn’t know which way to turn.

Like the previous books in this engaging series, there are plenty of supporting characters, some good, others bad, all as lifelike and rounded as the leading players. I especially liked teenage Lily, bright and talented but ground down by an overbearing father, and Iris the sharp-as-a-tack shop assistant who sees right through her charming boss. It makes a pleasant change, too, to find a policeman who appreciates the agency members’ abilities rather than shutting them out. And the 1970s Suffolk setting, with its stormy seas, pretty seaside towns and bleak inland terrain, is another big plus.

The series promised well right from the start, and The Great Shroud is another feather in its cap. Was Matt’s death an accident, or murder? Will the serial killer be run to earth? What are the nefarious goings-on behind the jewellery theft, and did the butler do it? Will Frank and Laurel ever admit their feelings for each other? And most important of all, will the Anglian Detective Agency survive to solve more mysteries? I for one devoutly hope so! Crime fiction would be very much the poorer without them.
------
Reviewer: Lynne Patrick 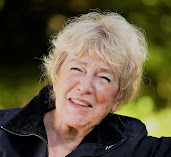 Lynne Patrick has been a writer ever since she could pick up a pen, and has enjoyed success with short stories, reviews and feature journalism, but never, alas, with a novel. She crossed to the dark side to become a publisher for a few years and is proud to have launched several careers which are now burgeoning. She lives in Oxfordshire in a house groaning with books, about half of them crime fiction.
Posted by Lizzie at 14:32