Did She Fall? by Thorne Smith 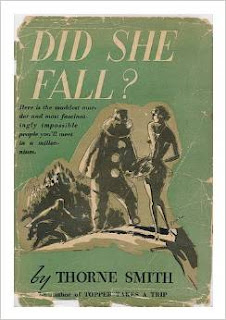 The book opens slowly, in more the style of a literary book than a swift whodunnit, with a discussion about when murder can be justified. It swiftly reaches the beauty and charm of Emily-Jane and there are sinister hints that it had never occurred to her that 'other people had a little living to do for themselves,' and sounds the warning note that 'This is a bad way to be.'

The engagement is about to be announced between Emily-Jane and Barney Crewe. Barney is part of a wealthy and highly-respected family. Barney's father had never forgiven him for the death of Barney's mother at his birth and his elder brother Daniel had been both brother and father to Barney all of the latter's life. When his father died leaving an unjust will, Daniel had swiftly redressed the balance, making Barney a wealthy young man. Barney is an artist who has 'won some degree of recognition among the more eccentric artists who created with fine but futile frenzy, yet who totally lacked the impish irrelevance that Barney brought to even his most abominable work.'

Daniel and Barney 'each in their own way, were strangely devoted to each other,' and the foundations of the story rests on their relationship. Their sparring adds a great deal to the character and humour of the book: 'Daniel was convinced, perhaps justly, that his brother needed the protection of a stronger mind. If not, why did the boy persist in painting red apples sky-blue and giving to his nudes the unpalatable hue of a very old and dead fish?

“Because I see 'em that way,” the exasperated Barney had once explained under the fire of rude criticism.

“Well it's a terrible way to see anything,” observed Daniel, and added colour blindness to his brother's other deficiencies.'

All had been well with the close-knit family group consisting of Barney, Daniel and Daniel's girlfriend June, and Daniel's long-time friend Sam Stoughton and Sam's wife, Sue, until Barney had met and fallen in love with Emily-Jane. Daniel and Sam had known Emily-Jane at college and she knew something criminal that Sam had done and, even though this crime had been caused by her, she was happy to blackmail Sam and Daniel with her knowledge. In fact Emily-Jane was a totally unscrupulous young woman who had, 'perfected the art of concealing an essentially vicious nature behind a refreshingly healthy and admirable exterior.'

At the start of the book Daniel is contemplating killing Emily-Jane as the only way to save his family. He is a fundamentally decent, kind young man and finds this hard to imagine. It is not made any easier by the presence of his friend Scott Munson, a criminal psychologist and detective.

When Emily-Jane falls from a cliff to her death, the book follows the investigation into not merely who has done it but the tortured thought processes of those who have benefited from Emily-Jane's death, until, finally, the truth is revealed.

Did She Fall? is full of sharp humour, especially in the interactions between Daniel and Barney, but it has sadness and loss at its heart. The book has numerous clichés, including the crime that put Sam and Daniel in Emily-Jane's power and the demeanour of Scott Munson, but it is still a powerful and gripping psychological thriller. Above all, Emily-Jane is a chilling portrait of a narcissistic sociopath and the destruction that such a person can cause in the lives of ordinary, affectionate people.
- - - - - -
Reviewer: Carol Westron 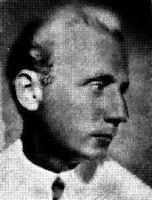 James Thorne Smith Jr. (27 March 1892-21 June 1934).  Smith was born in Annapolis, Maryland the son of a Navy commodore. He attended Dartmouth College. He is best known for his humorous supernatural fantasy fiction. Smith achieved meteoric success with the publication of Topper in 1926. Smith's comic fantasy fiction, which featured  lots of drinking, and supernatural transformations, which aided by racy illustrations sold millions of copies in the early 1930s. Smith drank as steadily as his characters. He died of a heart attack while vacationing in Florida.