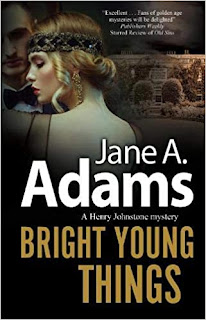 It is January 1930, and two respectable families are walking slowly along the path beside Bournemouth beach on their way to church. They are horrified by the sight of a large man walking along the beach carrying the body of a young woman, who is clad in a beaded cocktail dress. When the man is certain that he has their attention, he places the body on the sand and walks away. Although the spectators send one of their number to fetch a police constable, they are too intimidated by the man’s size and by his air of calm certainty to approach the young woman until he is out of sight.

Detective Inspector Henry Johnston is also in Bournemouth, residing with his sister and her family while he recovers from injuries received during his last case. Henry knows that at some point he will have to face returning to work, although part of him dreads the necessity. However, he is taken by surprise when his sergeant and good friend, Mickey Hitchens, arrives to summon him to lead the investigation into the death of the girl on the beach.

The case that started so strangely has become even more macabre, because the victim has been identified as Faun Moran, one of the ‘bright, young things’, wealthy, good-time, young people who do wild things to avoid boredom. The thing that makes the appearance of Faun’s body so extraordinary is that she had been declared dead some months ago, after a car accident following a house party. The accident occurred in a remote country district and the car had rolled down a steep ravine and caught fire. A farmer heard the crash and arrived in time to quench the flames before they got out of control, nevertheless, the girl’s body was badly battered and burned. The only surviving witness to the accident is Malcolm Everson, the young man who left the house party with Faun to take her for a drive, but he was badly injured and is still so traumatised that he is in a nursing home and has no memory of the accident.

The original investigation into the accident was bungled and rushed, partly because of police incompetence but also because of pressure from Faun’s wealthy, influential family. Now Henry and Mickey have a double duty: not only do they have to discover where Faun has been since the accident and who is responsible for her death, also they have to identify the girl who was buried in Faun’s place so that they can discover how she died and return her body to her family.

At first Henry struggles to get a grip on the case, hampered partly by his lingering physical weakness but also by the obstructive attitude of the senior members of Faun’s and Malcolm’s families. Fortunately, younger members of the families are more cooperative and Henry’s sister, Cynthia, uses her social contacts to help Henry gain access to people who knew Faun. After sifting through the evidence, Henry and Mickey have a suspect but little evidence, certainly not enough to bring the killer to justice. Taunted by a murderer who thinks that kidnap, torture and murder is a game, they know that if they fail to bring the killer to justice Faun will not be the last girl to suffer and die.

Bright Young Things is the seventh book in the series featuring Henry Johnston, but it works perfectly as a stand-alone mystery. This is a series that gets stronger all the time, with superb characterisation and excellent period detail, and an intriguing, intricate plot. The construction of the narrative allows the reader to know more information than the investigating detectives, with short sections in the voices of the perpetrators and heart-rending excerpts from Faun. Bright Young Things is a page turner, which I thoroughly recommend
------
Reviewer: Carol Westron

Jane A. Adams was born in Leicestershire, where she still lives. She has a degree in Sociology and has held a variety of jobs including lead vocalist in a folk rock band. She enjoys pen and ink drawing; martial arts and her ambition is to travel the length of the Silk Road by motorbike. Her first book, The Greenway, was shortlisted for the CWA John Creasey Award in 1995 and for the Author's Club Best First Novel Award. Jane writes several series.  Her first series featured Mike Croft. Several books featuring DS Ray Flowers. Seven titles featuring blind Naoimi Blake, and six titles featuring Rina Martin. Her most ret series is set between the two World Wars and featuring Detective Inspector Henry Johnstone and his sergeant, Micky Hitchens. Jane has also written several standalone novels. She is married with two children.