‘Surfeit of Lampreys’ by Ngaio Marsh 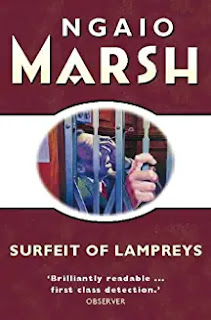 The story opens in New Zealand when young Roberta Grey is befriended by the Lamprey family, English aristocrats temporarily living in New Zealand.  It continues when Roberta, aged twenty and newly orphaned, arrives in England to stay with the Lampreys in London.  The Lampreys are a large family: Lord and Lady Charles and their children, Henry, Frieda, twins Stephen and Colin, Patricia and Michael.  They are all attractive, funny, lively and extravagant.  Of the four adult children only Henry, the eldest, realises that they should alter their lifestyle.

One of the Lampreys' inevitable financial crises is looming and the only hope of avoiding bankruptcy is for Lord Charles to receive aid from his disapproving, joyless and tight-fisted older brother, Lord Wutherwood.  With a debt-collector sitting in the kitchen, only the Lampreys would decide that the best way to soften Lord Wutherwood towards them was to hold a charade to entertain him during his visit.  The scheme was not successful and Lord Wutherwood storms out.  He has to wait in the lift that serves the flat for some time until he is joined by his loathsome wife, Violet.  The lift goes down a few floors and then up again and when the doors open Lord Wutherwood is dying, stabbed through the eye by a skewer that had been used in the charade.

Detective Chief Inspector Roderick Alleyn of Scotland Yard is called in to investigate.  Coming from the aristocracy himself, Alleyn has no problems dealing with the Lamprey family on equal terms.  Unwisely they close ranks and refuse to tell Alleyn all he needs to know.  There are many things Alleyn has to discover.  Was Lord Wutherwood stabbed before his wife joined him and the lift doors closed?  Which twin, Colin or Stephen, operated the lift for their uncle and why are they being so secretive?  Did Lady Wutherwood behave so irrationally before the shock of her husband's death?  Alleyn soon discovers that the Lampreys are all charming and amoral, but are any of them capable of murder to inherit their uncle's wealth?  Before Alleyn can answer any of these questions there is another murder.

In Surfeit of Lampreys, the murder of Lord Wutherwood is gruesome but the tone of the book is light and often playful and the solution is revealed in a scene of theatrical melodrama.  Even at the height of the investigation, Marsh draws humour out of Alleyn's attempts to question the Lampreys' deaf aunt: 'Alleyn wondered distractedly if there was anywhere at all in the flat where he could yell in privacy into the ear of this lady.  He decided that the best place would be in the disconnected lift with the doors shut.  By a series of inviting gestures he managed to lure her in.'


Surfeit of Lampreys was published in 1941 but Marsh made sure the light tone of the book was not marred by setting it just before the Second World War.  The approach of war is only mentioned fleetingly.  A large number of Ngaio Marsh's crime novels have a love story as a sub-plot and in this book it follows Roberta Grey's growing love for Henry Lamprey, even though she cannot believe he could feel anything more than kindness for her.  The title Surfeit of Lampreys indicates the light-hearted, punning spirit of the book.  King Henry I was reputed to have died of overeating a 'surfeit of lampreys,' a small, eel-like fish of which he was too fond.

All of the Roderick Alleyn detective stories are an enjoyable read but Surfeit of Lampreys is probably the most humorous.  The fun starts on the first page with a description of Lady Charles' economy measure of dismissing the servants and buying 'the washing machine that afterwards, on the afternoon it broke loose from its mooring and so nearly killed Nanny and Patch.'  After seventy-five years, Surfeit of Lampreys is still an enjoyable read to cheer a winter's day.
------
Reviewer: Carol Westron 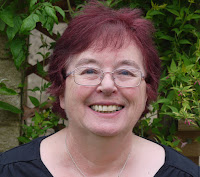