‘The Daughter of Time’ by Josephine Tey

Originally Published by Penguin in 1951 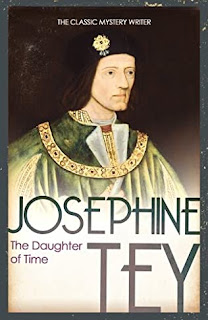 Detective Inspector Alan Grant has been injured and must remain lying flat in bed in hospital.  Unused to being inactive, Grant looks for ways to solace his boredom but nothing claims his interest until his friend, the actress Marta Hallard, suggests he does some historical detecting and brings him a selection of 'faces', portraits of men and women from history who were in some way involved in a crime or mystery.  This challenge appeals to Grant, who has always prided himself on his ability to recognise criminal tendencies in a person's face.  Unfortunately, when he sees the portrait of a grave looking man in medieval dress, Grant thinks he has the face of an austere and honourable judge.  Then he discovers the portrait is of Richard III, condemned by history as the man who ordered the murder of his nephews, the Princes in the Tower.

Annoyed with himself for making such an error, Grant gets drawn into researching what he can discover about Richard III and the disappearance of his nephews.  In days long before the internet or email, his first researches are drawn from a novel, The Rose of Raby, a fictional account of the life of Richard's mother and the school books treasured by one of his nurses, Ella Darroll.  In describing these childish history books, Tey draws upon her old school days when, as a girl she drew spectacles and moustaches on the pictures in her history books and on the flyleaf of each of her books she wrote:

In The Daughter of Time, Tey describes Ella Darroll's book as having the same graffiti and inscription.  It is also interesting to note that Tey regarded Scotland as being in Europe, not part of Great Britain.

Drawn into his researches Grant moves on to read the works of academic historians who are eminent authorities on the period and soon realises that none of the conclusions they draw would stand up in an impartial court of Law and quite a few of their pronouncements make little sense.  He also realises that history is written by the winners and that Sir Thomas More's account of Richard's guilt is no more reliable than Shakespeare's play, which depicts Richard as a deformed and evil monster.  He also concludes that often the emotive narratives that tell of historical outrages are either grossly exaggerated or did not happen.  Grant gives these unsubstantiated stories the name 'Tonypandy,' after the place in Wales where unarmed protesters were reported to have been shot by troops, which Grant knew was a fabricated story.

Having set Grant on his quest, Marta Hallard provides him with an ally, a young American researcher, Brent Carradine, who assures Grant that 'Truth isn't in accounts but in account books.'  Together Grant and Carradine put together the cases for and against Richard III and conclude that he was innocent of the murders of his nephews and that the deaths of these inconvenient claimants to the throne were amongst the many killings that the Tudor dynasty committed to consolidate their grasp on the throne.

The Daughter of Time is a compelling book that reveals Tey as a great writer.  It not only manages to make the dry bones of history live but also shows it is possible for a detective to complete a fascinating piece of detection while trapped in a hospital bed.  In 1990 the Crime Writers' Association voted The Daughter of Time as 'the greatest mystery novel of all time.'

The title of the book comes from some words often attributed to Francis Bacon but also an old proverb, 'Truth is the daughter of time.' Although Tey gives firm historical reasons for her belief in Richard's innocence, her arguments also rest on the practical psychology that informs all her detective novels: 'One could not say: Because Richard possessed this quality or that, therefore he was incapable of murder.  But one could say: Because Richard possessed these qualities, therefore he is incapable of this murder.  It would have been a silly murder, that murder of the boy Princes; and Richard was a remarkably able man...'

The Daughter of Time was published in 1951 and was the last detective story Tey published before her death.  However her doubts about the guilt of Richard III were clear in her writing five years before this, when Miss Lux, one of the characters in Miss Pym Disposes (1946) describes Shakespeare's play, Richard III as a 'criminal libel on a fine man, a blatant piece of political propaganda, and an extremely silly play.'  As an interesting aside, it would be fascinating to know how this criticism related to Laurence Olivier (whom she would have known personally as he had played Bothwell in Tey's play Queen of Scots.)  Although the film version of Richard III was not produced  until 1955, Olivier played the role of Richard III many times to great acclaim in the 1940s at the Old Vic.

Tey was not a member of the Richard III society, which was founded in 1924 but The Daughter of Time gave fresh impetus to the society, founded to redress the balance of history and restore the reputation of Richard III.  Tey was cynical enough to know that there was little hope of changing most people's way of thinking by giving them honest facts.  As Grant observes, “It’s an odd thing but when you tell someone the true facts of a mythical tale they are indignant not with the teller but with you.'  And at the end of the book Grant offers Richard's final epitaph, 'He was loved in his day.'

The Daughter of Time has never been out of print and its popularity has soared since the discovery of Richard III's skeleton on a Leicester car park.  Like all of Tey's mystery novels, The Daughter of Time is a book that is well worth reading and a pleasure to reread.

The Daughter of Time  is available in hardback, paperback, Kindle and audio book.