An Eye on the Murder Squad by Peter Lovesey 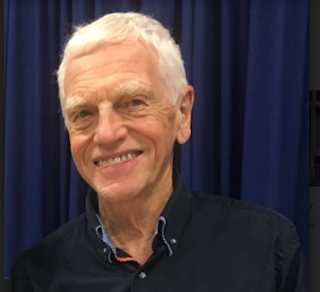 Peter Lovesey on an unexpected challenge

This was an unsettling and almost mystical experience: a fleshed-out character with his own distinctive voice arriving in my book, Diamond and the Eye, without any obvious input from me, the author. I can’t explain how it happened. Johnny Getz was on the scene, ready to give my case-hardened detective superintendent the drubbing of his life. Creating a character is normally a slow, accumulative process for me, a fusion of memories and imagination. I like to feel I’m in control. Not this time.

‘Mind if I join you?’
Peter Diamond’s toes curled.

There’s no escape when you’re wedged into your favourite armchair in the corner of the lounge bar at the Francis observing the last rites of an exhausting week keeping a cap on crime. Tankard in hand, your third pint an inch from your mouth, you want to be left alone.

The stranger’s voice was throaty, the accent faux American from a grainy black-and-white film a lifetime ago. This Bogart impersonator was plainly as English as a cricket bat. His face wasn’t Bogart’s and he wasn’t talking through tobacco smoke, but he held a cocktail stick between two fingers as if it was a cigarette. Some years the wrong side of forty, he was dressed in a pale grey suit and floral shirt open at the neck to display a miniature magnifying glass on a leather cord.

The man in the armchair, Peter Diamond, had arrived at Bath Police thirty years ago in The Last Detective, so I know him pretty well by now. He has mellowed a little from the ex-Met man with a record of bullying witnesses. He still scares his colleagues a little, but he’s smart enough to survive in the much-changed modern police. He takes short cuts and gets reprimanded and has no respect for his so-called superiors and no ambition to join them. He’s had big shocks along the way, quit the police for a while and worked as a security officer in London, but agreed to return in The Summons, when Bath police needed him more than he needed them. Since then, good colleagues like DI Julie Hargreaves have found him unbearable and transferred to other police authorities. All in all, you would expect him to be a match for a sharpie like Johnny, but this first encounter doesn’t work out like that.

‘Should I know you?’

‘No reason you should, bud.’

No one called Diamond ‘bud’. He’d have said so, but the soundtrack had already moved on.

‘I got your number. You’re the top gumshoe in this one-horse town and you’re here in the bar Friday nights when you’re not tied up on a case. What’s your poison? I’ll get you another.’

‘Don’t bother.’ Diamond wasn’t being suckered into getting lumbered with a bar-room bore who called him bud and claimed to have got his number.

‘You’ll need something strong when you hear what I have to say.’ The bore pulled up a chair and the voice became even more husky. ‘Good to meet you, any road. I’m Johnny Getz, the private eye.’

‘Say that again, the last part.’

Against all the evidence that this was a send-up, Diamond had to hear more. ‘Private eye? I thought they went out with Dick Tracy.’

‘Sam Spade, then. We’re talking private detectives, are we? I didn’t know we had one in Bath.’

‘What do you mean – “one”? I could name at least six others. The difference is they’re corporate. I’m the real deal. I work alone.’

‘Where?’
‘Over the hairdresser’s in Kingsmead Square.’ An address that lacked something compared to a seedy San
Francisco side street, which was probably why the self-styled PI added, ‘The Shear Amazing Sleuth. Like it?’

As a reader, I can’t get enough of the American private eyes. I came early to The Continental Op and Philip Marlowe and loved the laidback style and deadpan wit. I moved on to Mike Hammer, Lew Archer, Travis McGee, Mitch Tobin, Amos Walker, Easy Rawlins, Kinsey Millhone and V.I.Warshawski. Happily, the list is endless and I’m still finding more. They operate with impunity in America, rarely troubled by the police. I won’t say it’s impossible to write a convincing PI novel set in Britain. Conan Doyle managed it, even if you’d think twice about calling the world’s most famous consulting detective an eye.  Peter Cheyney pulled it off with Slim Callaghan, although his better-known character, Lemmy Caution, operated in America. Ingenious British writers like Liza Cody, Stella Duffy, Mike Ripley, John Lincoln, Cathi Unsworth and Kate Atkinson continue the tradition. Making this genre believable in a UK setting is a rare talent.

So how does Johnny Getz elbow his way into a Peter Diamond novel? In truth, he’s a fantasist, a false eye. He loves the aura of back-street San Francisco. He has done his reading and can quote key passages from Chandler and Paretsky. At intervals he takes over the writing and gives his withering opinions on Diamond and the Bath police. But I suspect it’s all done with mirrors. Johnny has no experience and only one client. He is driven by his dreams. At the start, he is smart enough to reel Diamond in slowly.

There was a pause while the conflict in Diamond’s head – contempt battling with curiosity – raged and was resolved. ‘What did you say your name is?’

‘How do you spell that?’

Diamond sighed. ‘Is it real?’

‘Sure. You heard of Stan Getz?’

‘The jazz musician? You’re not related?’

‘It was his real name as far as I know,’ Diamond said. ‘Is yours your own?’

A shake of the head. ‘In my line of work, you gotta make a noise in the world.’

‘You play the sax yourself?’

‘Nah. I’m talking publicity.’ He took a business card from his pocket and snapped it on the table like the ace of trumps. ‘Johnny Getz. Gets results. How does that grab you?’

Diamond had a pained look, and not from being grabbed. ‘What do you want with me, Mr Getz?’

‘Mr Getz. I keep first names for my friends.’

Johnny Getz took a moment to reflect on that. He refused to take it as a putdown. ‘What do I want? I want your help with a case.’

‘Don’t even start,’ Diamond said, seizing his chance to end this. ‘I’m a police officer. We don’t get involved outside our work.’

‘This is your work. It’s got your name all over it.’ 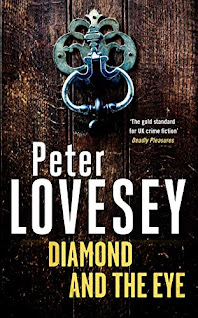 Here I must stop. You’ll have guessed that Diamond, for all his unease, gets into a sort of partnership with the Shear Amazing Sleuth. I say ‘sort of’ because they are rivals as well. At times they compete to solve the mystery. Throughout the book they hold each other in contempt and yet they are forced to pool information to make progress. Authors are often asked whether characters seem to develop in ways they had never planned. Johnny came to me fully grown. He drove the plot from page one. It was a takeover.

Diamond and the Eye
is published by Sphere.
You can find more at Peter’s website
www.peterlovesey.com