RUTH PIERCE. (She made the local history books, but what really happened?)

"On Thursday 25th January 1753, Ruth Pierce of Potterne in this County agreed with three other women to buy a sack of wheat in the market, each paying her due proportion towards the same;  one of these women in
collecting the several quotas of money discovered a deficiency, and demanded of Ruth Pierce the sum which was wanting to make good the amount:   Ruth Pierce protested that she had paid her share and said she wished she might drop down dead if she had not.   She rashly repeated this awful wish;  when to the consternation and terror of the surrounding multitude, she instantly fell down and expired, having the money concealed in her hand."

The above is the writing on the market cross in Devizes, Wiltshire,
which was erected in 1814 at a cost of £1,5OO. Have you ever wondered what really happened?

Ruth Pierce woke that January morning with pains in her chest. She sat for a few minutes on the edge of the bed, breathing out with the pain, which seemed to ease it a little.  She dare not waste too much time for it was market day and she needed the wheat for her bread.  She had experienced the pain several times lately and thought it was probably the cold getting to her. She would wrap up as warmly as possible when she set out today.

The market was held in Devizes, a few miles from the village of Potterne where she lived, and if she set off early she wouldn't need to hurry in case it brought the pain back. She took the money she expected to pay for her share of the sack of wheat, for she and three others usually bought one between them, it was cheaper.  And it wasn't wise to take more than you needed, even if you could afford to, because of the thieves who made the markets their hunting ground.

The journey seemed to take longer than ever, but she went steadily and only needed to pause twice and catch her breath until the pain subsided.  The second time it left her feeling sick and she closed her eyes and stood still until the nausea passed. It wouldn't do to hang over the gutter in case she was taken for a vagrant.  The noise and jostling in the market place made her feel dizzy, but she found her friends, and together they went to buy the wheat. Now, instead of that icy coldness, she felt hot, a sticky, sweaty kind of heat that once more made her feel sick.  She clutched her money tighter, once she had her share she could get off home and away from the smells and sounds of the market, which she normally enjoyed.

The bossiest of the women was talking now. Ruth saw her in a haze, but she couldn't hear a word, although the woman's lips were champing.  Oh hurry, hurry, Ruth thought, - perhaps she could hitch a ride back to Potterne in one of the carts... she swayed suddenly, but the crowd around her unwittingly supported her and she shook her head to bring everything back into focus.

'Ruth Pierce, you haven't paid your share.' Dimly she saw the woman in front of her, faintly she heard her voice.

Why, oh why was it all taking so long when she felt so bad.  She had to get out, back to the quiet of home, but she couldn't leave without her share or they'd not eat next week. She thought she made it clear to them that she only wanted her quarter of a sack, that she'd paid, hadn't she taken the silver from the jug only this morning - would she have walked all this way feeling as she did without bringing it?  Summoning all her strength she protested. 'I want my wheat.  I've paid my money - I'll drop down dead if not.'

She was icily cold, yet could feel sweat on her face, and the pain was coming on again.  In the silence that fell on the crowd she repeated her words.  The faces before her merged into a ball of colour and she felt herself falling.  When she was being lifted someone unclenched her hand, and exposed for all to see the silver piece she had been clutching to pay for her share of the sack of wheat.

Is this what happened to Ruth that January day in 1753?
Or was it more like this?

Ruth Pierce took her money from the pot on the mantelpiece, then hesitated.  Yes, best to take it with her, although she was confident she wouldn't need it.  Still, if she had it on her and there was any bother she could feign surprise, and say she thought she had paid, but the very presence of the money was surely proof that she intended to.  Of course she intended nothing of the kind.  It was proving easy to cheat over payment for her share of the wheat.  The last time, with clever remarks on her part, the others had been certain the missing money had been stolen by one of the many thieves of the market place.

A smile played about her lips as she donned her bonnet and cloak and left her cottage home in Potterne for the walk into the market town of Devizes. Her fingers closed comfortingly round the coin in her hand, which she expected to replace in the pot on the mantelpiece later in the day.  The market was crowded as usual, but she contacted the three other women who shared the sack of wheat with her.  They weren't her friends, simply useful acquaintances for the business transaction.  None of them could afford the money for a whole sack and this arrangement worked well. Especially when she could miss paying her due sometimes. She smiled again to herself.  She didn't try it on too often in case they became suspicious, but...

Someone jostled her - it was the woman who always collected the money.  She had never liked her and it pleased her to do her down if she could.

Ruth revelled in the sights and sounds of the market place.  It coloured her life to come here, it was a bit of adventure as well as being a necessity for she needed the wheat to bake the bread for the family.  She took her share and made as if to toss the money, jostling with the others as she did so. It added spice to the day if she could return with both.  Because Ruth did not intend to always be poor, and the silver pieces in the pot on the mantelpiece were the beginnings of her dream come true; the key to a better, fuller life some day.  So wrapped in her thoughts was she that she missed what one of the women were saying, until they nudged her.

She was already turning away as if she hadn't heard, when the woman collecting the money shouted loudly at her and several turned to stare.

Ruth decided to brazen it out and made to continue through the market, but she was hemmed in now from all sides. Reassuringly she felt the coin in her hand. No-one knew it was there. They wouldn't search her if she sounded confident enough...

'I'm short Ruth Pierce and I'll have your money now...'

She had to keep up the pretence, everyone seemed to be watching her.  'I've paid my money,' she repeated, adding for good measure, 'I'll drop down dead if not...'The gasp from the immediate crowd around her seemed to echo through the market place, as Ruth Pierce fell within seconds of uttering the words a second time.   Her fingers slowly opened to reveal her share of the wheat money.

Take your pick - what do you think really happened on that day in 1753.  Was Ruth feeling ill and truly thought she had paid, then, on discovering the money still clutched in her hand, broke out in a cold sweat, had a heart attack, and died? Or had she robbed in this way before and become so confident of her bluffing powers that God took a hand?

We shall never know, but in the market place at Devizes her memorial stands as a powerful  warning to all who think of telling a lie. 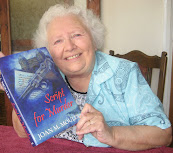 Joan Moules was born in Hastings, Sussex, and spent the first nine years of her life there.  In 1940 she moved to London. Joan always wanted to write a book and in 1979 her first one Strand of Gold was published.  Since then she has written another twenty books. Joan says to walk into a bookshop and see a book with your name on the cover is the icing on the cake. Especially if someone is buying it.