‘The Soul Breaker’ by Sebastian Fitzek 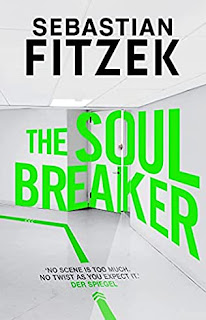 Two students Patrick and Lydia volunteer as guinea pigs in a psychiatric experiment run by their professor. He gives them papers to read thought to have been written by a Viktor Larenz, psychiatrist, describing events many years before. He is interested to know how they will be affected after they have studied them closely.

They learn of how someone known as The Soul Breaker wrecks women's lives, leaving them paralysed in body and mind. The only clue left is a note in the victim's hands written in the form of a riddle. Details then are given of a remote psychiatric clinic run by Professor Rassfeld assisted by head psychiatrist Sophia Dorn.

A heavy snowstorm strikes plus a sudden freeze. A man is found collapsed under a layer of snow and is brought into the clinic. He comes to and has no recollection of who he is. They name him Caspar. The weather now deteriorates even further and the building is completely cut off.

Then Sophia is found naked and comatose in a bath full of water. In her hand is a slip of paper – with a riddle written on it! The Soul Breaker seems to have struck again.

Suspicion falls on a patient brought in earlier by ambulance as he was seen acting suspiciously and certainly behaved in a psychotic manner.

Now they are snowed in, no one can escape and there is no chance of rescue.

The patients are all locked in their rooms, but the suspected one seems so have disappeared, but where could he have gone? Panic sets in, especially when another member of staff, again a woman, is attacked by The Soul Breaker, leaving another strange riddle.

Everyone starts to suspect everyone else. How can this possibly end, will there be more attacks, will they be rescued in time?

The big question is of course, how will the revelations affect the two student guinea pigs?

My goodness, the action takes place at such a breath taking, breakneck speed it left me feeling quite exhausted!

Sebastian Fitzek certainly knows how to write a heart stopping psychiatric thriller. This is the second book of his I have read and recommend it as highly as the other, “Seat 7a” if not more.
------
Reviewer: Tricia Chappell

Sebastian Fitzek was born 13 October 1971 in Berlin Germany. He is a writer and journalist. His first book Therapy was a bestseller in Germany in 2006, toppling The Da Vinci Code from the #1 position. Fitzek is currently one of the most successful writers in Germany.

Tricia Chappell. I have a great love of books and reading, especially crime and thrillers. I play the occasional game of golf (when I am not reading). My great love is cruising especially to far flung places, when there are long days at sea for plenty more reading! I am really enjoying reviewing books and have found lots of new authors. great new authors.
Posted by Lizzie at 15:48