‘You Can’t Hide’ by Karen Rose 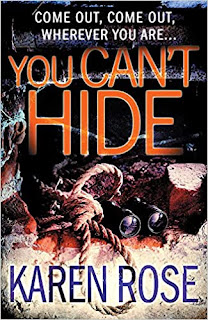 As a psychiatrist, Tess Ciccotelli is bonded by a code of confidentiality to her patients. Even when a depraved and twisted murderer is preying on those patients, she refuses to break that confidentiality to help police enquiries. Most would admire her principle; however, the police are feeling just the opposite because one by one Ciccotelli’s patients are losing their lives- each one in a way that reveals a secret about them that only Ciccotelli could know. The investigation then changes, and Tess becomes the main suspect, and then love rears its head in the form of Detective Aidan Reagan who believes Tess is innocent.

The plot gains in momentum as Tess’s family find themselves in grave danger. It then becomes clear that this killer is out to ruin Tess’s reputation, her career, and eventually her life. So, who could want to do that? Someone who knows an awful lot about her. Have they been watching her? Stalking her? When pictures of her, nude, in the shower and dressing, turn up in the paper, it becomes clear that this is the case and that that someone very depraved and twisted is after her, and because she won’t break that code of confidentiality her life is balancing on a very thin line. As the pressure to catch this killer mounts, so the walls tighten in and around Tess.

Karen Rose is fast gaining a reputation as one of the best suspense writers of the genre and this book is yet another example of her unquestionable talent. It twists, turns, drop us from all heights, and when we think we can take no more, along comes another surprise. Rose knows how to keep us turning those pages and yet be afraid of what each one will reveal. There are breaks in the tension, which comes in the love-story between Tess and Detective Aidan Reagan. The timing of these scenes are well placed, and beautifully written; the tenderness within the sex scenes are some of the best I have read in a long time. Sex is hard to write, but Rose makes it look easy. This book is highly recommended.
------
Reviewer: Linda Regan.

Karen Rose was born 29 July 1964 at Baltimore, Maryland USA. She was educated at the University of Maryland. She met her husband, Martin, on a blind date when they were seventeen and after they both graduated from the University of Maryland, (Karen with a degree in Chemical Engineering) they moved to Cincinnati, Ohio. Karen worked as an engineer for a large consumer goods company, earning two patents, but as Karen says, “scenes were roiling in my head and I couldn't concentrate on my job, so I started writing them down. I started out writing for fun, and soon found I was hooked.” Her debut suspense novel, Don't Tell, was released in July 2003. . Since then, she has published twenty-four more novels. Karen lives in Florida with her husband of twenty years and their children. When she's not writing, she enjoys travelling, karate and though not a popular Florida pastime, skiing.