‘The Other Half Lives’ by Sophie Hannah 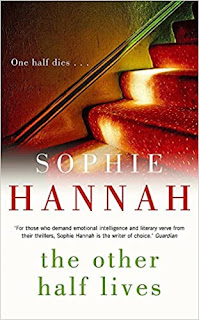 Aiden Seed confides to the woman he loves that he killed a woman called Mary Trelease.  After struggling with this momentous piece of information, Ruth Bussey finally goes to the police and tells Sergeant Charlie Zailer. But when they check out the address, they confirm that the Mary Trelease at that address is alive and well.

Then it begins to get complicated as Charlie Zailer and DC Simon Waterhouse try to discover why a man would confess to murder. What sounds straightforward on the surface conceals a troubled past.  We are someway into the book before Ruth’s story is revealed, and that is traumatic.  All the characters are dysfunctional with pasts they conceal, and as I gradually found myself drawn in, I found it difficult to sort out what was real and what wasn’t. Even the characters I thought I could trust I found that I couldn’t.

This is a psychological thriller such as I haven’t read for a long time.  At one point some three quarters through the book I sorted out who I thought was a straight ace, only to discover that I couldn’t have been more wrong.

Fascinating writing, taking you into places you might not want to go, but you will be totally unable to stop reading.  Does provide a satisfying conclusion. Very highly recommended.
------
Reviewer: Lizzie Hayes

Sophie Hannah is an internationally bestselling crime fiction writer. Her crime novels have been translated into 34 languages and published in 51 countries. Her psychological thriller The Carrier won the Specsavers National Book Award for Crime Thriller of the Year in 2013. In 2014 and 2016, Sophie published The Monogram Murders and Closed Casket, the first new Hercule Poirot mysteries since Agatha Christie's death, both of which were national and international bestsellers. Sophie’s novels The Point of Rescue and The Other Half Lives have been adapted for television starring Olivia Williams and Darren Boyd. Sophie is also a bestselling poet who has been shortlisted for the TS Eliot award. Her poetry is studied at GCSE and A-level throughout the UK.  Sophie is an Honorary Fellow of Lucy Cavendish College, Cambridge. She lives in Cambridge with her husband, two children and dog.