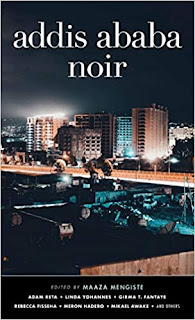 The latest short-story collection in this fantastic series brings readers to Ethiopia, with fourteen noir stories set in and around the capital, Addis Ababa. The writers include both residents and writers of Ethiopan background living elsewhere.

The first section is Past Hauntings and these stories reach back to the dark times of the Revolution of 1974 and the Red Terror of the Derg regime that followed. Kind Stranger by Meron Hadero tells of a double betrayal; A Double-edged Inheritance by Hannah Giorgis describes the love between a University professor and her great-niece; Ostrich by Rebecca Fisseha gives a child’s view of the Derg regime and how one death haunted her. In Maaza Mengiste’s powerful Dust, Ash, Flight, a forensic scientist and a photographer from a notorious Argentinian prison bond with an old man who’s lost his son. In these stories judgement is suspended as the line between perpetrator and victim is blurred.

The second section is Translations of Grief, three stories about how environment shapes people, or how folklore is created. Father Bread by Mikael Awake tells the sinister story of a kindly priest (or is he?) and an abused child. Mahtem Shifferaw’s The Blue Shadow is a lyrical, atmospheric story of a woman watching her own funeral. A Night in Bella Sefer by Sulaiman Addonia is about sexual tensions and desires that go against the locally accepted behaviour.

Part III, Madness Descends, has four unsettling stories which give a vivid portrait of life in Addis Ababa now. Insomnia by Lelissa Girma shows a man whose memories would not let him sleep. Of the Poet and the Café by Girma T Fantaye has a poet who has tried to erase his mocked writing, and who finds he has erased himself. Bewketu Seyoum gives a vivid description of a bus journey in Under the Minibus Ceiling. Of Buns and Howls by Adam Reta is a series of linked narratives: a dog which foretells death, a flying bun, a missing boy and a strange woman in white.

The final section, Police and Thieves, begins in traditional crime fashion with Kebele ID by Linda Yohannes, and a couple who find their maid is untrustworthy. In Soloman Heilemarian’s None of your Business, a primary school student’s assignment to find about democratic rights leads to a tragic clash with police. The final story, Agony of the Congested Heart, by Teferi Nigussi Tafa, is the story of a committed but naive revolutionary.

Each of these stories is a miniature window on another world; together, they give a vivid impression of a world rich in folklore, in tradition, in rooted beliefs; a modern world which is struggling with its past, with the divide between rich and poor, powerless and powerful. Highly recommended.
------
Reviewer: Marsali Taylor

Maaza Mengiste was born in Addis Ababa, Ethiopia, and graduated with an MFA in Creative Writing from New York University. A recent Pushcart Prize nominee, she was named "New Literary Idol" by New York Magazine. Her work has appeared in The Baltimore Review, Ninth Letter, and 42opus.