‘Death is the Cure’ by Nicola Slade 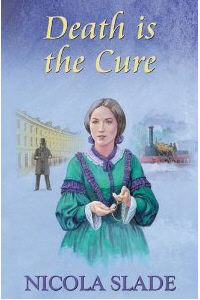 Charlotte Richmond made a very successful detective in her first adventure and this second outing confirms her skills.   In 1858 she visits Bath with her friend, Elaine Knightley, who is to undergo a startling new medical treatment.  The whole atmosphere of Victorian Bath is cleverly evoked - the stuffiness of polite manners, the centrality of illness and the apparently petty concerns of the town’s inhabitants.

The genteel behaviour that Charlotte had expected from the other guests at Waterloo House is not really what she finds.  The atmosphere is one of unease with dark secrets hinted at behind elegant facades.  The people staying at the guesthouse include a French family whose oldest member appreciates Charlotte’s depths of character and an American who sees in Charlotte a fellow observer of the world.   All the people at the table for each meal show signs of agitation as they receive various comments which seem innocent.   These characters develop as we learn more and more about them.

Charlotte returns to the house one day and falls over a corpse on the cobbled mews outside. Shockingly this is the stabbed body of one of her fellow guests and she feels impelled to ask questions about this event. She uncovers family secrets of both personal and political concern imperilling her own safety in the process.

Again, Nicola Slade has given us an exciting story peopled by memorable Victorians and involving a riveting mystery.
---------
Reviewer: Jennifer S. Palmer
Charlotte first appeared in Murder Most Welcome.

Nicola Slade (1943-2020) was brought up in Poole, Dorset. She wrote children’s stories when her three children were growing up. Winning a story competition in Family Circle galvanised her into writing seriously. Scuba Dancin, a romantic comedy was her first published novel. A series of Victorian mysteries followed: Murder Most Welcome was published by Robert Hale Ltd, 2008, featuring Charlotte Richmond, a young widow in the 1850s. Charlotte also features in the second of the series: Death is the Cure, (Robert Hale Ltd, 2009). The third of Charlotte's adventures, The Dead Queen's Garden, was published in December 2013. Murder Fortissimo came out January 2011. This is a contemporary 'cosy' crime novel, featuring former headmistress, Harriet Quigley, and her sidekick and cousin, Rev Sam Hathaway. A Crowded Coffin', is the second adventure for Harriet and Sam.