As we approach the fifth Mystery Fest it seemed like a good idea to look back over the history of Mystery People’s own conference, which has been great fun but far from uneventful.

Lizzie Sirett, founder and organiser of Mystery People, has always been on the look out for ways to promote crime fiction and had often expressed the wish that Mystery People could run a crime fiction conference. Lizzie and I discussed this when we met at other conferences, such as Crimefest. Of course, we had no illusions that we could manage a major, international, three-or-four-day conference, but after considering thepracticalities, we concluded that we could not even run a day-conference: the problems of finding and hiring a suitable venue, arranging and paying for insurance and thechallenges of promoting and organising ticket sales seemed overwhelming. We decided that this was one great idea that would have to be shelved.

However, for some years I had been involved with Portsmouth Bookfest, the three week long celebration of all kinds of literature which is run by the Portsmouth Library Service. In 2017 I heard that the author who had been organising the highly successful day event CSI Portsmouth was giving up and wondered if this would be aninteresting opportunity for our Mystery People conference. I approached Clare Forsyth, the senior library assistant who co-ordinated the Bookfest events and asked if this was a viable possibility. Clare was interested in our proposal and, between Clare, Lizzie and myself, the outline of our new event was worked out. The collaboration was quite straightforward: the library service would provide the venue (the Arts Centre on the Third Floor of Portsmouth Central Library), which was covered by their insurance, they would supply drinks and cakes to the ticket holders, be responsible for selling tickets and include our event in the Bookfest promotion. Mystery People would be responsible for facilitating authors to attend Mystery Fest to give presentations and join panels, as well as providing author badges, and taking our share of promoting the event. A local independent bookshop, Hayling Island Books, would man a bookstall selling the authors’ books. Any profits from ticket sales would go to support the library service.

It all worked out incredibly well. I was amazed, and continue to be astonished, by the generosity of the authors and other speakers who agreed to attend this unknown conference and threw themselves wholeheartedly into making it a success. We had put an excellent day of crime fiction entertainment in place, starting with a delightful plenary session in which actor and author Linda Regan would interview her actor husband, National Treasure, Brian Murphy. We had a fine range of panels and talks planned with some fabulous authors, including million book bestseller Leigh Russell and, to balance all the crime fiction, a presentation by two lecturers from the University of Portsmouth about Forensics and Crime Scene Investigation.

Speakers were prepared, hotel rooms booked, tickets purchased, a mammoth batch of scones ordered from the Arts Centre cafe. What could go wrong? … Just one thing. The weather! It was the 3rd March 2018, when the Beast from the East dumped a vast amount of ice and snow on the country, obliterating the last weekend of Bookfest and our first Mystery Fest. It was impossible for people to travel even short distances to reach the library, let alone travelling from all over the country. Mystery Fest had to be postponed. 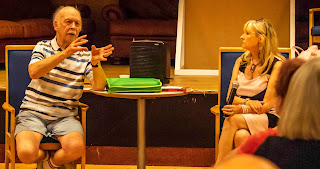 One thing I will never forget, which lightened the despair of giving up on the event we’d worked so hard to create, was the unbelievable support of the lovely people who’d been scheduled to speak at Mystery Fest.


Within a few days we had rescheduled Mystery Fest for a Saturday in the summer. Linda Regan and Brian Murphy were unable to make the date that suited the rest of the speakers and the library, but they generously offered to provide an afternoon of entertainment at an alternative date.  It was a most enjoyable afternoon as Linda interview Brian.

Both the rescheduled Mystery Fest and Brian and Linda’s event were very successful. Mystery Fest had survived to carry on the next year.