‘The Threlkeld Theory’ by Rebecca Tope 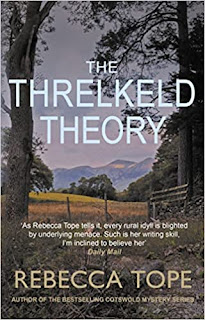 If you’re planning on visiting the Lake District any time soon, be afraid. Be very afraid. And try not to cross the path of florist Simmy Brown or her two teenage pals Ben the boy genius and Bonnie his girlfriend and Simmy’s shop assistant. Wherever they go, suspicious death seems to follow – even to Simmy’s wedding to her rediscovered childhood sweetheart, Christopher Henderson.

Simmy and Christopher choose the pretty Lakes village of Threlkeld (pronounced Threkkled for the uninitiated) for their after-ceremony bash, and as the festivities are drawing to a close some disturbing news arrives. Bruno, a friend of Ben’s and the stepson of Christopher’s newest employee at the auction room he runs, has been taken to hospital with a head injury after an attack (or possibly an accident – no one is quite sure what happened) on a footpath a short distance outside the village.

It gets worse. Next day Bruno’s mother finds him dead, and the police, who were content with the accident theory, are forced to start investigating. Unfortunately, Detective Inspector Moxon, with whom Simmy, Bonnie and Ben have an odd sort of working relationship, isn’t in charge, partly because it happened outside his territory, but also because he was in Threlkeld at the time attending the wedding, and in any case is due to take off for a fortnight’s holiday. Police resources are overstretched, and Ben has a vested interest in finding out what happened, so it seems to be down to him and Bonnie to get to the bottom of the mysterious circumstances which have emerged.

The story is peopled with a rich variety of characters, many of them familiar to fans of the series (my own favourites remain Simmy’s eccentric parents, Angie and Russell) and others who bring assorted degrees of shadiness to confuse and delight the reader. The Lakes landscape, too, plays a key role, especially its stone circles and villages, and the ubiquitous traffic. And Bonnie and Ben are having difficulty communicating, largely because of the physical distance which separates them and a lack of reliable transport.

This time Simmy and Christopher are relegated to a minor role; they are too absorbed in each other and their four-month-old son Robin to do much sleuthing, especially since they are also settling into their new home, a vividly depicted barn conversion in Hartsop. But there is plenty to compensate: Angie and Russell come to a big decision; Derek Smythe, the dead boy’s stepfather, has a distinctly fishy side; and of course, Ben has a lot of investigating to do in the absence of much interest from the police.

At first, it’s far from clear whether a crime has been committed at all, but Ben is sure all is not as it seems. And of course, he digs out the truth about the mystery, with quite a bit of help from Bonnie and some co-operation from various other characters and not from others. The result is another of Rebecca Tope’s well-crafted rural crime novels, which will be a pleasure for her many fans and may well garner her some new ones.
------
Reviewer: Lynne Patrick

Besides "ghost writer" of the novels based on the ITV series Rosemary and Thyme. Rebecca is also the proprietor of a small press - Praxis Books. This was established in 1992