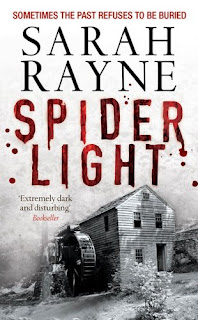 The Bookseller comment on Spider Light as "extremely dark and disturbing" is an accurate one, at the same time it is curiously compelling and fascinating.  It is set in the Cheshire countryside in an imaginary village (map provided) with a macabre history which overlaps into the present.  The focus of the tragic events is Twygrist the village mill, based, as the author admits, on Nether Alderley Mill in Cheshire, now expertly run by the National Trust and with no violent history.

So, the story moves between imaginary events which happened five years previously, sometimes including associated happenings from the more distant past, and the present.  The chief character in the book, Antonia Weston, a psychiatrist, has just rented Charity Cottage in the village, on release from a five-year sentence in prison. The novel is written mostly from her point of view but at times from the minds of one of the other characters in the book.  There are supernatural suggestions in the village, derived from the violent events, past and present, which have occurred or are occurring.  These are emphasised by references to more frightening parts of nursery stories, persistent music, echoing voices, footsteps, stalkers and other followers.

It is a violent book.  I counted twelve murders, all but one committed by women and including matricide, parricide, killing of a cousin/brother substitute, and, for good measure, an attempted suicide.  There is plenty of information about the running of the local hospital, Latchkill, with its Reaper Wing for violent patients, and some entries from hospital records about the patients and their treatment.  There are also details about the actual running and maintaining of Twygrist Mill in the past, with its present deterioration making it the grim scene for most of the murders.

The title Spider Light describes the half-light/twilight which exists at dawn and evening and in which obstacles and noises take on curious, sometimes threatening, shapes and sounds. This all suggests a gruesome story and one can run out of adjectives to describe the book.  It is a grim but also a good read.  Have a go.
-------
Reviewer: Rosemary Brown