‘Bone By Bone’ by Carol O’Connell 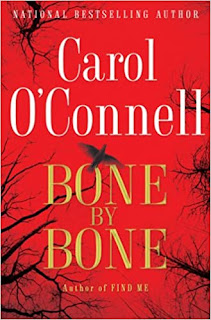 Oren Hobbs comes home from the Army after twenty years away only to find that his brother Josh is also returning, bone by bone.  Missing since he was fifteen, Josh’s disappearance was a source of mystery at the time and this is only magnified by his belated and fragmented return.  The primary suspect in the case was his seventeen-year-old brother, Oren, who now pursues the case, hoping for closure for himself, his father and for the rest of the town who were affected by this very local tragedy.

Highlighting the incestuous nature of small-town America this well paced book weaves an intricate plot around a series of characters, some of whom are highly dysfunctional and appear tortured by their own lives.  The reader is drawn into the town and all the little politics and back histories which appear to have been initiated by the disappearance and death of Josh Hobbs. His hobby of photographing the townsfolk gives Oren some reminders and suggestions of what was happening in the town beneath the veneer of respectability, along with his own memories of clandestine meetings with an older woman with a very suspicious husband.  Was it Josh or Oren who was supposed to be the target of the killer?  This becomes one of the many questions which the story does not resolve till close to the end.

Politics, subterfuge, supernatural and a little hint of romance are all present and the reader is led through a maze of different stories and subplots as well as a complicated set of personalities and relationships.  As the plot unfolds some of the characters unwind and occasionally can get lost under the layers of complexity which Carol O’Connell builds into the story, but the writing is, as ever, taught and finely balanced.

I am a great fan of the Kathy Mallory series written by O’Connell, but this is an interesting departure into a stand alone novel.  It is classic murder mystery and will keep the reader guessing right up to the end. Recommended.
-----
Reviewer: Amanda Brown

Carol O'Connell was born 1947. She studied at the California Institute of Arts/Chouinard and the Arizona State University. She lives now in New York City.