‘A Passion For Killing’ by Barbara Nadel 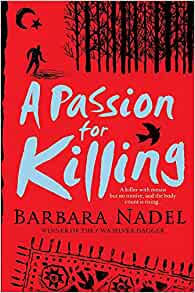 At the end of my review of Dance with Death,  the eighth novel by Barbara Nadel set in Turkey,  I wrote that I was looking forward to her ninth novel with the same background.  A Passion for Killing  is that ninth novel and I was not disappointed.

The main characters are by now familiar.  Inspector Cetin Ikumen is in overall charge as usual, now after thirty years on the force.  His friend and colleague,  Mehemet Suleyman,  has been promoted to Inspector,  and sergeants Ayse Farsakoglu(female) and Izzet Melik are their deputies.  Wives,  Fatma Ikumen and Zelfa Suleyman,  also make appearances.

The characters around which the main story revolves are concerned with the world of carpets and carpet dealers in Istanbul,  an unusual setting which  Nadel in her acknowledgements claims is "fascinating and fun  but also intricate and complicated".  To help the reader to follow the story there is a glossary of Turkish words,  especially concerned with markets and carpets, and a cast of characters who, for regular readers, have a reassuring familiarity.

As in Dance with Death  there are two plots in the novel.  The first chapter introduces the less important plot,  the discovery of a body in a hotel bedroom, whom Suleyman claims is the victim of the peeper,  a serial killer in Istanbul who is attacking and killing homosexual young men.  Ikmen, however, thinks that the murder of Cabbar Solyu, a nasty fat Mafioso, does not fit the usual pattern of this murderer.  The Prelude has already introduced the reader to the main theme.  It takes place in a large carpet warehouse where Suleyman's impoverished father, is trying to sell an over-large carpet to the owner, Rasit Bey.  Bey's assistant disappeared and has been absent for three days after organising a sale of carpets in a small village on the edge of a forest, north east of Istanbul.  When, later, his jeep and body are found by a walker in a gorge, it  becomes clear that this is murder.

The two plots with their characters, settings and complications make fascinating reading.  Nadel knows Turkey well enough to take the reader beneath the surface of the old city of Istanbul and to persuade one that her characters actually live there.  Anyone who has visited Turkey is familiar, superficially, with the intricacies and customs of the carpet trade and Nadel's background knowledge of Turkey together with her dedication to "my favourite carpet dealers", convince and entertain the reader in a  crime novel exploring an unusual setting and life-style.
-------
Reviewer: Rosemary Brown