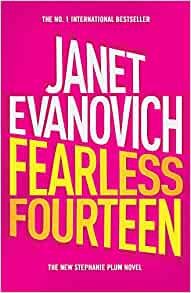 In the pursuit of bond law enforcement Stephanie somehow finds herself agreeing to collect Loretta’s son Mario from school if Loretta’s is not bonded out in time to collect him.  So inadvertently Stephanie finds herself taking care of Mario, who answers to Zook.  She deposits him at Morelli’s. Loretta is cousin to Dom Rozzi, a bank robber who has just been released from prison and is now in pursuit of the proceeds that he stashed away prior to being incarcerated.  Meanwhile Lulu is having trouble with Tank, her fiancé who is having wedding nerves.

This Stephanie episode put me in mind of the film Arsenic and old Lace, I think it was the body found in Morelli’s basement, and that fact that just about every character in the book at some point turns up at Morelli’s.

It was fun – and I will still be avidly awaiting the next installment.
------
Reviewer: Lizzie Hayes

Janet Evanovich grew up in New Jersey, but now lives in Hampshire. She is the No. 1 bestselling author of the Stephanie Plum novels including Turbo Twenty-Three and Tricky Twenty-Two; the Knight and Moon novels including Curious Minds, co-written with Phoef Sutton; five novels in the Fox & O'Hare series - The Heist, The Chase, The Job, The Scam and The Pursuit - co-written with Lee Goldberg; the Lizzy and Diesel novels including most recently Wicked Charms, co-written with Phoef Sutton; twelve romance novels; the Alexandra Barnaby novels; the Troublemaker graphic novels; and How I Write: Secrets of a Bestselling Author. She has won several major crime fiction awards including the CWA John Creasey Award, Dilys Award and Silver Dagger.