‘When Will there Be Good News?’ by Kate Atkinson 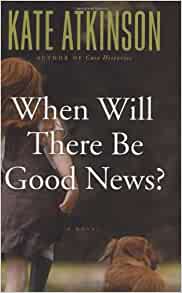 This book sees the welcome return of the likeable and sympathetic ex-police officer and now private- investigator, Jackson Brodie. Brodie took the wheel in the last two of Atkinson’s unputdownable novels – Case Histories and One Good Turn. And this one is even better. This book is a masterpiece in writing and storytelling.

I hesitate to call this book a whodunnit, although it is, but one that has broken through the mould of the genre. Here five plots are skilfully weaved together, played out, and joined into the unfolding story; then the story moves towards its climax. Atkinson’s prose is breathtakingly enviable, and her characters leap off the page. The main character, orphaned Reggie, works as a nanny to a doctor, Joanne. As the story unfolds, we come to realise Joanne was the little girl at the beginning of the book, who survived the frenzied knife attack on her family during a happy afternoon picnic because she ran to save her dog.

Reggie happens to be nearby when Jackson Brodie is involved in a train crash and is lying unconscious and close to death. She resuscitates him and keeps him alive until the paramedics arrive.

Brodie’s ex-love Louise is the senior police investigating officer who comes to deliver the news to Joanne that her family’s attacker is free from jail. Brodie has just married someone else, as has Louise, and here the romance comes in.

Then Joanne goes missing. Brodie owes Reggie a favour, as she saved his life, and she is now calling it in. She wants him to find Joanne and her one-year-old baby. Reggie knows Joanne well enough to fear for her safety, even if Louise dismisses her plea’s, believing Joanne has gone away to come to terms with her family’s murderer being freed.

Now Jackson Brodie and Louise are working against each other.

The pacing in this story is like your favourite ride on a fairground, moving at all speeds, but never at the one that you expect. It is like a family of Russian dolls as you take a layer off you discover another, and then another and another right up until the end. It won’t let you put it down. It is simply a great story, and a great read. Atkinson just keeps getting better and better. If I was asked to award this book up to five stars, I would give it six.
-------
Reviewer: Linda Regan

Kate Atkinson was born in 1951 in York and now lives in Edinburgh. Her first novel, Behind the Scenes at the Museum, won the Whitbread Book of the Year Award. She is the author of a collection of short stories, Not the End of the World, and of the critically acclaimed novels Human Croquet, Emotionally Weird, Case Histories, and One Good Turn.  Case Histories introduced her readers to Jackson Brodie, former police inspector turned private investigator, and won the Saltire Book of the Year Award and the Prix Westminster.