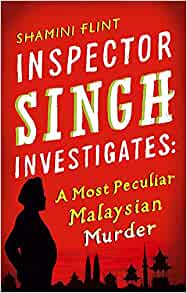 This is the first book in a new series featuring an Inspector in the Singapore police force.  Inspector Singh is a first glance not a prepossessing character – he is of large girth; I think the description is ‘fleshy’. A heavy smoker, his breathing always sounds strained, and we gather he is not a particularly snappy dresser.  We meet Inspector Singh wedged in a plastic seat at Changi Airport.  He had just that morning read in the newspaper of the murder of Alan Lee and felt sorry for the policeman who would be charged with the task of finding the murderer; he is even sorrier now that he has learnt that that policeman is himself.

Although the murder of Alan Lee was in Malaysia, his accused wife, Chelsea Liew, is a famous Singaporean model and a Singapore citizen. Inspector Singh knows that he has been passed the poisoned chalice.  His hostile reception by the Malaysian police is no surprise. He is assigned an assistant or rather, as Singh suspects, a spy.

He begins his investigation by interviewing Chelsea Liew and is not wholly convinced of her guilt. Despite Inspector Mohammad’s assertion that they have an open and shut case, Singh begins to dig.  His method is to listen, and he reminded me in his approach of Inspector Gamache in the Louise Penny books.

Chelsea Liew’s main consideration is her children. Prior to the murder she and her husband have been locked in a custody battle, and now he is dead, and she is potentially on death row for his murder, things look bleak.  As Singh investigates, he discovers several possible suspects for the killing of Alan Lee – not a popular man by all accounts.

There are many twists in the story, which draw on the background of its setting.  I learnt a good deal about the relationship of Malaysia and Singapore.  I alluded initially to Inspector Singh being of unprepossessing visage, but he grows on one. He is a wonderful character, his intellect cleverly belied by his appearance.

This is a marvellous book. I enjoyed it enormously and cannot recommend it too highly. The writing is good, the characters clearly defined, and Inspector Singh a terrific character. I also loved the humour, which is subtle and, in many ways, endearing.  I understand that a second book is to be issued later this year. I will be first in line for it.
----
Reviewer: Lizzie Hayes

Shamini Flint lives in Singapore with her husband and two children. She began her career in law in Malaysia and also worked at an international law firm in Singapore. She travelled extensively around Asia for her work, before resigning to be a stay-at-home mum, writer, part-time lecturer and environmental activist, all in an effort to make up for her ‘evil’ past as a corporate lawyer! Shamini has sold over 500,000 books since she began writing six years ago.  There are five in the Inspector Singh series. Shamini also writes children's books with cultural and environmental themes.
Posted by Lizzie at 11:53