'The Death Chamber' by Sarah Rayne 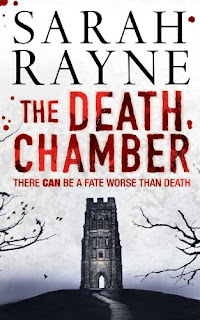 Sarah Rayne writes superb psychological thrillers, and The Death Chamber is her latest.  Like its four predecessors it has at its centre a building, in this case and somewhat grotesquely,  it is the death and execution chamber of Calvary Gaol in Cumbria.  Like Spider Light the story moves backwards and forwards in time.  Quite a lot of the action takes place in the present when a group of researchers are making a television when a group of researchers are making a television programme at the gaol and the chief character in the book,  Georgina Gray, the great granddaughter of Walter Kane a previous prison doctor at Calvary, gets involved with this group.  The story moves back to 1938 when hangings were still normal practice and grim details of the procedure are included.

Further back, it moves to 1917, towards the end of the First World War to a time when spiritualism and seances were popular practice and again some information about these is shown. Each of these periods has its own group of characters.  Events from each period get recalled from time to time as links between happenings and characters are established.

You would be right in thinking that this makes for a complicated story and at times it is difficult to remember which actual events and people are being recalled.  Into each section intriguing characters are introduced, and identities of people and records of events take unpredictable twists.  Ruins, remote wild countryside and eerie atmosphere lend a threatening, disturbing dimension, so that super-normal occurrences seem natural, even expected.  Some of the characters, like Saul Ketch, the warden and gravedigger at Calvary, and Mr. Partridge with his wife, Violette, seance mediums, fit into the atmosphere.  The fact that many of the names of the characters and the actions are not what they seem when they first appear adds to a mysterious and occasionally perplexing plot.

The story is told through the minds and actions of a variety of characters depending on what period we are moving in.  Occasional glimpses into the minds of less important people are also given.  Altogether suspense is well maintained, and an eerie atmosphere successfully suggested.  Descriptions such as wild, isolated, threatening, supernatural, grim keep springing to mind when trying to assess the book.  I guess the title and the name of the gaol should warn the reader what to expect.  It has fairly been called a mesmerising psychological thriller which is difficult to put down, but allow plenty of time this is a lengthy read.
-----------
Reviewer: Rosemary Brown