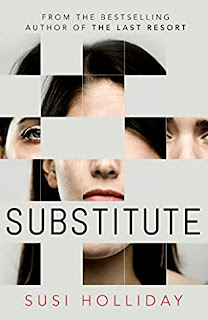 I do love a book with an unusual concept, which is why I chose Substitute for review. The plot combines psychological thriller with science fiction. Yet, a science fiction that is relatively plausible. After all, who really knows what goes on in the military's science labs?

At the heart of the story is the idea of the mad scientist, Frankenstein's laboratory and bringing someone back from the brink of death. In this instance it is not by patching them up with body parts and volts of electricity, but with drugs that have taken years to perfect. And coupled with the science is the ever-present question of choice and ethics.

Chrissie is a wife and the mother of a young daughter, Holly. She has struggled with depression and never got over the grief of losing her mother, so her fears for her daughter are exaggerated. When a mysterious stranger, who seems to know all about her, knocks on her door and offers her the option to keep those she loves safe, despite her reservations it is an offer she can't refuse. The offer is simple. If one of her nominated loved ones is about to die her chosen substitute will die in their place. Chrissie doesn't trust the stranger or the ethics behind the deal but out of fear she agrees, impulsively selecting her substitutes as people who she thinks have wronged her. Almost immediately her nominated loved ones have 'accidents' and the reality of the offer becomes apparent.

The book is written in the present tense, which creates a slightly detached, surreal feel that made me wonder about the narrator's reliability at first. Interspersed between the present-day storyline are chapters set in the 1980s where two scientist, Michael and Edward, are working on a programme that ends up becoming anything other than what was originally intended.

As with any book that's a bit different, Substitute is not going to appeal to everyone. You do need to suspend disbelief and just enjoy the ride. I enjoyed it a lot. It's a book that will has you questioning how far you would go and whether you would compromise your own morals in order to keep your loved ones safe!
-------
Reviewer: Christine Hammercott

Susi Holliday grew up in East Lothian. A life-long fan of crime and horror, her short stories have been published in various places and she was shortlisted for the inaugural CWA Margery Allingham competition.  She has written three crime novels set in the fictional Scottish town of Banktoun, which are a mix of police procedural and psychological thriller. Susi also works as a pharmaceutical statistician. She is married and lives in London, and you will find her at crime fiction events in the UK and abroad.