‘The Locked Room’ by Elly Griffiths 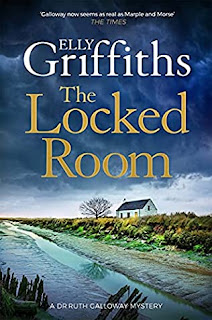 The 14th book in the series featuring archaeologist Dr Ruth Galloway finds her in late February 2020 in London in the house she grew up in clearing out her late mother’s belongings. Her father is now remarried, and his new wife Gloria wants to redecorate the house, so Ruth is applying herself to the task of clearing out all traces of her mother. Shuffling through masses of paperwork, and photographs, she is startled to see a photograph of her cottage. As her mother heartily disliked Ruth’s Norfolk cottage in the Fens, saying it’s too isolated and why doesn’t she want to live near shops, Ruth cannot understand why her mother would have a photograph of it. Closer scrutiny shows the cottage to be a painted a different colour and on the reverse of the photograph is written Dawn 1963.

Although determined to solve the mystery of why her mother has a photograph of her cottage Ruth is thwarted by the arrival of the Covid epidemic and finds herself and her daughter Kate in isolation in her remote cottage.  Her only relief from homing schooling Kate being her new neighbour Zoe who is renting the cottage next door.

Meanwhile DCI Nelson, who is Kate’s father, is investigating a series of deaths that appear to be suicides, but Nelson has a nagging feeling that there is something wrong and instructs his team to do some further checking. Council workers digging up a street in the centre of Norwich have found what looks to be a human skull.  Hearing of the discovery of a skeleton, Nelson drives out to visit Ruth and discuss it, which in my view was probably an excuse as his wife Michelle had taken their son George to Blackpool.  When introduced to Zoe, he recognises her as a carer who was tried for the murder of her employer.

The effects of living through a pandemic vary considerably, Nelson thinks that it’s a lot of fuss about nothing and carries on as normal, while his boss Super Jo calls a meeting, to instruct on hand washing, and carrying handsanitiser at all times. Cathbad, Ruth’s druid friend, now married to Judy a Detective Inspector on Nelson’s team, starts yoga lessons using zoom.

There are as always in this series small throwaway events that make Griffiths such a wonderful writer. Nelson is having breakfast and Ruth puts a jar of marmite in front of him and finds herself holding her breath only to release it when Nelson covers his toast with the black spread. Lovely!

The more they investigate the so-called suicides the more anomalies they uncover.  Then the pandemic draws closer when someone close to Ruth falls very ill with Covid.  And the mystery surrounding the photograph of her cottage continues to frustrate Ruth. Just who is Dawn?

Brilliantly plotted with complex mysteries to keep you turning the pages, there is also an intriguing cliff-hanger.  Roll on the next book, soon please. Highly recommended.
------
Reviewer: Lizzie Sirett 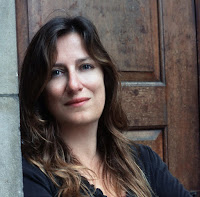 Elly Griffiths is the author of a series of crime novels set in England’s Norfolk County and featuring forensic archaeologist Ruth Galloway. The first in the series, Crossing Places, earned a good deal of praise both in Griffiths’ native country, England, and in the U.S. The Literary Review termed it “a cleverly plotted and extremely interesting first novel, highly recommended.  Since then, Elly has written twelve further novels featuring forensic archaeologist Ruth Galloway.  Recently she has written a second series set in the 1950’s featuring magician Max Mephisto and DI Stevens. There are six books in the new series.