‘Buried Too Deep’ by Jane Finnis 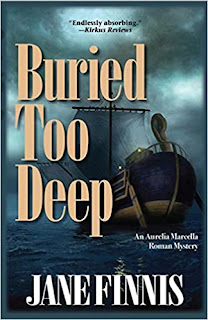 This series gets better with every book, and it was very good to start with.  Buried Too Deep is the third book in the series of murder mysteries set in Roman Britain in which Aurelia Marcella fights to uncover the truth and protect those she cares about.

In Buried Too Deep Aurelia struggles to discover the hidden agenda behind the pirate raids that are wreaking havoc on the North British coast.  The matter is especially urgent as these raids are endangering Aurelia's dearly loved sister, Albia, and Albia's husband and children.  Aurelia is a down-to-earth realist, and she is astonished to realise that the present troubles may be linked to a hunt for buried treasure, the existence of which she believed was merely legend.  What is more, it appears that this hidden gold has a link to a secret in her own family.  Soon Aurelia finds herself trapped between two ruthless and ambitious enemies, who will stop at nothing to gain ultimate power and it is clear that at least one of them is happy to kill her if it serves his purpose.  Fortunately, life cannot be too grim for Aurelia when her dearest friend and lover turns up to help with her enquiries.

Aurelia manages to discover many truths and secrets that have been deeply buried, including one that will change the lives of her whole family.  As to whether the hidden treasure was buried too deep for even Aurelia to uncover, I suggest you read the book to find out.  I don't think you'll regret it; I found Buried Too Deep a page-turner and I can't wait for number four.
------
Reviewer: Carol Westron
Jane Finnis' two previous novels featuring Aurelia Marcella are Get Out Or Die and A Bitter Chill, both published by Poisoned Pen Press. 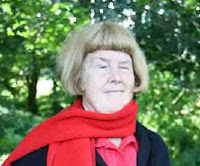 Jane Finnis read history at the University of London before working as a radio producer for the BBC.  Her four Roman mysteries are about life (and death) in first-century Roman Britain. They feature Aurelia Marcella, who runs an inn on the road to York, and keeps getting drawn into solving mysteries in what is still a new frontier province of the mighty Roman Empire. Jane now lives in  east Yorkshire and spends her time researching and writing about the Roman Empire. To read a review other most recent book Danger In The Wind, click on the title. 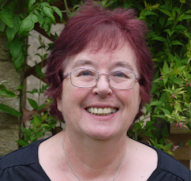 To read a review of Carol latest book This Game of Ghosts
Cick on the title.