‘A Private Business by Barbara Nadel. 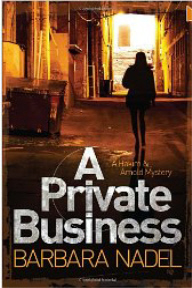 Once Maria Peters was young and beautiful and a notoriously foul-mouthed success on the comedy circuit. Then she married and retired from the circuit and lived happily ever after until her husband’s death left her a rich but grief stricken widow. Now 50 and still good looking, she tries to give her life some meaning by getting back on the comedy circuit but it’s not that easy because she’s also discovered religion in the shape of Pastor Paul Grint of the Church of the Holy Pentecostal Fire introduced to Maria by her old friend Betty Muller. The conflict is tearing her apart. Moreover, she is being watched, stalked even. So, being an East End girl herself, she goes to Lee Arnold, ex-Metropolitan Police, based in the neighbourhood of the Olympic Park in London‘s East End. Lee’s business is in dire straits and he and his assistant, the widowed Mumtaz Hakim, agree to take Maria on and find out who is stalking her and why. Meanwhile, Lee’s friend and former colleague, DI Vi Collins is investigating reports of a flasher in the neighbourhood. Lee and Mumtaz, however, have their difficulties: Lee’s alcoholic brother is causing problems, while Mumtaz’s stepdaughter Shazia shows signs of going off the rails (a serious matter for a young Muslim girl). Worse still, Mumtaz’s mother wants her to marry again but Mumtaz, having had one bad marriage, doesn’t want to have another. And she too is being stalked but she knows who her stalker is: the man who killed her husband.

This is a rip-roaring yarn which zips along. There is a wide range of are lively and well-contrasted characters, not only Cockney geezers but the wide spectrum of today’s East End community: Muslim, Jewish, Irish, African. Yet for all the pace and humour, there are serious undercurrents when buried secrets from the past are revealed. Lee, cocky yet sympathetic, with his West Ham-supporting mynah bird, is a great character. So too is Mumtaz with her endeavours to bridge the gap between her Muslim culture and the modern world of London. The many strands of the plot are tied together in a most satisfactory way - apart from one which indicates that there are more stories to follow. Yes, please. Can’t wait.
-------
Reviewer: Radmila May
Barbara Nadel has written a number of other stories featuring Turkish Inspector Ikmen. This is the first Hakim and Arnold story.

Barbara Nadel was born in the East End of London. She rained as an actress and used to work in mental health services. She now writes full time and has been a visitor to Turkey for over twenty years. She received the Crime Writers' Association Silver Dagger for her novel Deadly Web.

Radmila May  was born in the U.S. but has lived in the U.K. since she was seven apart from seven years in The Hague. She read law at university but did not go into practice. Instead she worked for many years for a firm of law publishers and still does occasional work for them including taking part in a substantial revision and updating of her late husband’s legal practitioners’ work on Criminal Evidence published late 2015. She has also contributed short stories with a distinctly criminal flavour to two of the Oxford Stories anthologies published by Oxpens Press – a third story is to be published shortly in another Oxford Stories anthology – and is now concentrating on her own writing.
Posted by Lizzie at 20:03