‘Murder Most Welcome’ by Nicola Slade 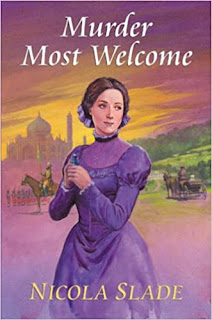 In an engrossing crime novel Nicola Slade introduces an unusual heroine.  The Victorian setting of 1858 is well portrayed both physically and emotionally.  The central character, Charlotte Richmond, is a young widow who has travelled to England from India to live with her husband’s relatives.  Charlotte is not a fainting heroine unable to manage for herself - her upbringing in Australia has made her self-reliant and resourceful.  She is, however alone in the world and very pleased to settle into the English country life of her middle-class in-laws.

The book is well paced as the development of Charlotte’s happy involvement in village life is interrupted by a surprising event.  Some of the characters are grotesque examples of the period - the hunting vicar, the mysterious Indian, the lower-class grandmother and the mother-in-law in a wheelchair.

The characters are listed at the beginning in typical Victorian fashion, but their descriptions are brutally direct.  I enjoyed the careful establishment of setting, the gradual revelation of Charlotte’s dark past and the shockingly climactic murder.  Charlotte makes her own efforts to discover the cause of the death which she knows is murder while everyone else assumes it to be natural.
-----------
Reviewer: Jennifer S. Palmer
This is Nicola Slade’s first historical crime novel though she has published short stories and a novel Scuba Dancing.

Nicola Slade (1943-2020) was brought up in Poole, Dorset. She wrote children’s stories when her three children were growing up. Winning a story competition in Family Circle galvanised her into writing seriously. Scuba Dancin, a romantic comedy was her first published novel. A series of Victorian mysteries followed: Murder Most Welcome was published by Robert Hale Ltd, 2008, featuring Charlotte Richmond, a young widow in the 1850s. Charlotte also features in the second of the series: Death is the Cure, (Robert Hale Ltd, 2009). The third of Charlotte's adventures, The Dead Queen's Garden, was published in December 2013. Murder Fortissimo came out January 2011. This is a contemporary 'cosy' crime novel, featuring former headmistress, Harriet Quigley, and her sidekick and cousin, Rev Sam Hathaway. A Crowded Coffin', is the second adventure for Harriet and Sam.