‘The Matchmaker’ by Paul Vidich. 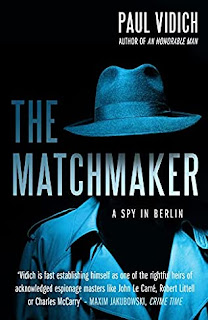 Anne Simpson, an American, and her husband, Stefan, an East German, live in a flat in West Berlin, close to the Berlin Wall.  She is an interpreter, debriefing refugees from Eastern Europe and he is a piano tuner whose work takes him to places like Vienna and Prague.  Anne is waiting for Stefan to return from one of his work trips when she gets a visit from a member of the American Consular staff, who informs her that they believe that Stefan is missing.  Anne’s life begins to crumble as she discovers that everything she has believed about her marriage is a lie - in particular, she learns that he has a wife and son living in East Berlin. She also discovers that the CIA and Western German intelligence, among others, want to know where he is and, indeed, whether he is alive or dead.

Stefan was in fact a Stasi spy, one of a network of men who seduced and married women in order to gain access to people and information of interest.  The intelligence agencies hope that Anne may be able to help them find an East German counterintelligence officer, known as the Matchmaker, who is responsible for this network.  When they approach her to help them in their investigations, she has little option but to do as they ask, and in so doing learns more about Stefan’s lies and his other life.

Starting just before the fall of the Berlin Wall, the novel’s descriptions of life on the eastern side feel authentic.  The Stasi held vast numbers of records on East German citizens and the suspicion and anxiety that underline life for everyone in East Berlin become even more apparent as the government’s grip falters, the Wall starts to come down, and the Stasi’s files are no longer secure.  Anne’s character develops as she faces the truth and the consequences of her situation.  All the characters are well drawn and believable and the plot crackles with tension as it moves forward with quiet inevitability.
------
Reviewer: Jo Hesslewood
Other books by this author:  An Honorable Man, The Good Assassin, The Coldest Warrior, The Mercenary

Jo Hesslewood.  Crime fiction has been my favourite reading material since as a teenager I first spotted Agatha Christie on the library bookshelves.  For twenty-five years the commute to and from London provided plenty of reading time.  I am fortunate to live in Cambridge, where my local crime fiction book club, Crimecrackers, meets at Heffers Bookshop .  I enjoy attending crime fiction events and currently organise events for the Margery Allingham Society.
Posted by Lizzie at 13:40