‘The Light House’ by Fran Dorricott 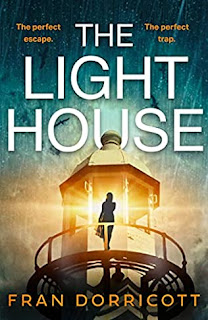 Six friends travel to a remote Scottish Island for a long weekend. They haven’t seen each other since five of them were at university together ten years previously. The trip is supposed to be a fun reunion, but the group doesn’t have the same dynamics it once had. Each of them has changed and some harbour petty jealousies, others hold secrets.

The venue is an old lighthouse and keeper’s cottage that have recently been renovated to luxury standards as holiday accommodation. It’s supposed to be a stunning location, luxurious and relaxing. But it’s only the first night when one of the group goes missing and they fear he has fallen over the cliff edge.

Lighthouses have a history of folklore. Being left on an island with no way off and only intermittent mobile phone signal soon becomes claustrophobic. With the weather deteriorating the island has extra menace. It doesn’t help that the group are all primed with tales of ghosts and accidents. So, when things start to go missing the weekend takes on an eerie feel, there is a sense of mistrust of one another and then the group begins to wonder if they are alone on the island after all — and if not, are they human or spirit?

An atmospheric suspense novel with a gothic edge told in multiple first-person viewpoints, and an island that has a personality of its own. An enjoyable read.
------
Reviewer: Christine Hammacott

Fran Dorricott is a bookseller and author. She studied creative writing at the University of East Anglia, and she received a distinction for her MA in Creative Writing from City University London. Her day job in a bookshop is secretly just a way for her to fuel her ridiculous book-buying addiction. The opportunity to draw inspiration from the many wonderful and whacky customer requests is also a plus.