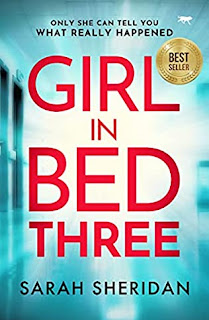 Nineteen-year-old Sophie Macreavey wakes up in a hospital bed having sustained stab wounds. Her adoptive parents and sister are all dead and her two brothers are missing. Only Sophie can tell the police what has happened, except she can’t — there are blanks in her memory.

As Sophie is interviewed by the police, she explains that the perfect family life her mother posted about online was a total lie. Far from being perfect, life in the Macreavey household was a nightmare. The photographs posted online were simply posed for with nothing behind them. In fact, her parents were abusive and restricting, using religion and food as weapons. The four adoptive children actually had little contact with society and were home schooled where their narcissistic mother had full control. They were all malnourished and had learned to hold secrets. So, when things start to come back about the attack Sophie isn’t completely honest with the Family Liaison Officer assigned to her.

Told from Sophie’s veiw point, the reader is right in her head, which flags up immediately that as a narrator we probably can’t trust everything she says. As the story progresses, we see the gritty resolve that has got her through the years of abuse. Over the years she has absorbed herself in the many books the house held, learning about the world and society so she’s not the naive teen you’d typically expect, especially when it becomes apparent that one day, she had found an old phone of her dad’s and managed to get online.

I would query that as the remaining victim of a multiple stabbing, Sophie would probably have been under closer police protection rather than sent home alone and allowed to wander at will with just one family liaison officer popping by from time to time but that said it’s a gripping character study with a twisting plot that I highly recommend.
------
Reviewer: Christine Hammacott

Sarah Sheridan was born in London and now lives in a village in South Northamptonshire. She gained a Masters degree in Eighteenth-Century French and English art from the Courtauld Institute of Art, before teaching art in secondary schools for thirteen years. After working with human rights organisations that protect minority groups from institutional abuse, Sarah worked towards a PhD at The Open University, researching the effect of secrecy on marginalised people, specifically the biological children of Roman Catholic priests. She has spoken about her research on various news programmes for the BBC and other media outlets around the world. It was this sense of secrecy and silencing that became the inspiration for her first crime novel, The Convent. Sarah is hugely obsessed with reading and is amassing such an unrealistically large book collection that some of it is now in storage. She is also addicted to writing, and after inventing stories (mostly in secret) from a young age and having various articles and short stories published, she wrote a children's book, The Top Secret Diary of Davina Dupree - inspired by her daughter -  in 2013. Overjoyed to hear that young readers were enjoying the story, she went on to write a series about Davina Dupree. When she is not looking after her three children and menagerie of pets or going for long walks with her wonderful partner Rich, Sarah can be found writing, while consuming large amounts of chocolate.

Christine Hammacott lives near Southampton and runs her own design consultancy. She started her career working in publishing as a book designer and now creates covers for indie-authors. She writes page-turning fiction that deals with the psychological effects of crime. Her debut novel The Taste of Ash was published in 2015.
To read a review of A Taste of Ash Click on the title
design@artofcomms.co.uk
website: www.christinehammacott.com
twitter: /ChrisHammacott
Facebook: /christinehammacott.author