‘Angels of the Flood’ by Joanna Hines 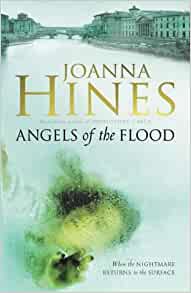 When the beautiful city of Florence was brought to ruin by the catastrophic flood of 1966, a number of young volunteers from overseas came to Florence to rescue the buildings, paintings and sculptures from ruin. They became known as Mud Angels or the Angels of the Flood. Among these are Kate Holland and her friends, David, Jenny, Aiden, Larry and Ross. Although in chaos, and even though the air smelt of damp plaster, sewage and mud, the city for the young Kate and her friends is magical.  A timeless period of innocence — they were all eventually to return to their real lives and follow careers, but for now they are a group bound together, sharing food money, laughter and tears - into this group comes the beautiful mysterious Francesca.

Francesca is reticent about her life and family, and although she becomes part of the group, she always seems aloof from the banter and jokes. Then Mario Bassano appears and through him Kate learns of Francesca’s link to the Bertoni family. Surprisingly after being secretive about her family Francesca suddenly invites them all to the Villa Beatrice for a party. But in the beautiful surroundings of the Villa Beatrice, tragedy strikes, and Kate returns home hoping to put the whole experience out of her mind.

Thirty years later Kate Holland, now an art conservator, is disturbed when she receives two Italian paintings, with no message - both have been altered and both are undervalued.  Coincidentally at a chance meeting with David in London she tells him of the paintings that she recognises. To David it’s simple. ‘Why don’t you go back to the Villa Beatrice and find out what’s going on’?  And so Kate returns to the one place to which she vowed she would never return, and unknowingly places her life in danger.

When Surface Tension was published in 2002, I said in my review that it invoked memories of one of my favourite books A Fatal Inversion by Barbara Vine. This book does the same. Joanna Hines is masterly at creating a chilling atmosphere of menace and suspense. A gripping psychological story.  Highly recommended.
------
Reviewer: Lizzie Hayes

Joanna Hines was born in London. She studied at Somerville College, Oxford.  She has published a number of acclaimed novels, including Improvising Carla which was dramatised for UK television. She was a Royal Literary Fund fellow at St Mary's …