‘Beneath The Snow’ by Caroline Carver 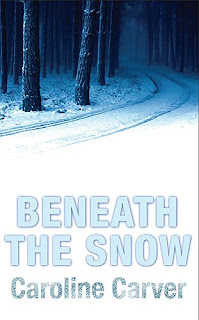 When the call comes through from Alaska reporting that Lisa McCall is missing in the Alaskan wilderness in the middle of a snow storm, her sister Abby’s response is ‘she’ll turn up in a few hours, she always does’. But Julia, Abby’s mother, is not convinced, especially as Lisa has been missing for four days.  Abby hasn’t spoken to her sister for four years, but appealed to by her mother who has multiple sclerosis, Abby finds herself flying out from England to join the rescue party.

As soon as Abby reaches Lisa’s cabin she knows something is very wrong  - the cabin has been ransacked. There is no sign of any of Lisa’s research material.  As she becomes more and more aware of the danger her sister may be in, she comes face to face with her own demon in the guise of Cal Pegati.

Lisa, a brilliant research scientist, was on the brink of patenting an incredible discovery, and Abby realises that she must find her sister before anyone else does.  But she may need some help. In whom does she place her trust - Trooper Demarco, Big Joe, or Cal Pegati?  Or can she trust no one and do it alone?

A thrilling mystery set during a freezing hard long winter in Alaska, Beneath the Snow is a real page-turner.
------
Reviewer: Lizzie Hayes
Caroline Carver won the CWA Debut Dagger for her first novel Blood Junction. Her subsequent books are Dead Heat and Black Tide. All highly recommended by this reviewer.

Caroline Carver was brought up on a dairy farm. At 18 she headed for the bright lights of London and four years later took a holiday in Australia which turned into a ten-year stay, working for the Sydney arm of several major international publishers. Between jobs, she travelled widely and adventurously: back-packing in South-East Asia on $10 a day for nine months, walking in New Zealand, trekking in Nepal and riding a camel through the Thar Desert are just a few of her travel experiences. Her first novel Blood Junction won the CWA Debut Dagger and was selected by Publishers Weekly as one of the best mystery books of the year. Her latest book is Know Me Now.