‘The Corpse with The Turquoise Toes’ by Cathy Ace 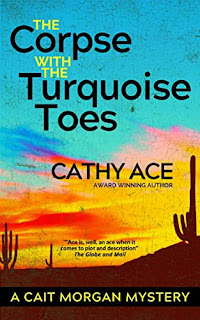 The story opens with psychologist Cait Morgan and her husband, retired homicide detective, Bud Anderson, travelling to Arizona in the small, luxury jet owned by wealthy, ageing rock star, Sammy Soul. Cait and Bud are going to stay at Desert Gem, a ‘recently opened luxury resort’ run by exponents of the ‘Faceting for Life’ movement, where they will be honoured guests of Sammy’s daughter, Serendipity. Sammy Soul has funded a luxury restaurant at the resort, which has been set up and will be run by Serendipity, a talented chef. Both Cait and Bud are eager to see Serendipity again, as they are fond of the girl whose life they saved a few years ago, but Bud is wary of visiting the Facetors’ resort, fearing that they will try to convert him to their beliefs. However, Cait reminds him that, when Serendipity had introduced them to the concepts of Faceting, it had seemed an eccentric but harmless movement, focusing on personal development. Cait looks forward to debating aspects of the Facetors’ beliefs, as well as sightseeing at iconic tourist destinations, such as Frank Lloyd Wright’s Taliesin West.

Before their arrival at Phoenix, Cait receives a text from Serendipity informing her of the death of Linda Karaplis, who, with her late husband, Demetrius, had been one of the founders of Faceting. This sudden death means that one of Linda’s closest friends, KSue, who was supposed to meet them, is too distressed to come, but another Facetor, Norman, will collect them instead. When Cait and Bud meet Norman and his wife, Elizabeth, their mode of conversation confirms Bud’s doubts about the visit. Elizabeth refers to Linda as ‘the Turquoise Woman’ and says that she will return, as Demetrius has returned. Both Bud and Cait are concerned when the Facetors claim that Demetrius has returned to them through his daughter, Zara, and they believe he speaks through her, making predictions and directing their actions.

Cait and Bud’s visit to Taliesin West is as inspirational as they had hoped, but when they arrive at Desert Gem they are greeted with the news of another sudden death. Despite this second tragedy, most of the Facetors are welcoming and Serendipity is as sweet and open as ever, although Elizabeth seems surprisingly antagonistic towards Bud and goes out of her way to warn people that he had been a cop. When Cait and Bud examine the original tenets of the Facetor movement they still seem outlandish but innocent, nevertheless, all their instincts warn them that something untoward is going on under the surface. This feeling is fuelled by the number of deaths that have been predicted by Zara, claiming to channel Demetrius, and by their doubts about how a luxury resort situated so deep in the desert could be a legitimate financial success. The further the couple probe, the clearer it becomes that wrongdoing on a large scale is taking place, but it is also evident that the Facetors are too deeply in thrall to the people they have accepted as their spiritual leaders to even consider that they are being duped. Inevitably, any attempt to alter this mindset will create anger, distress and potential danger to anyone who raises doubts about the leaders’ integrity. Cait and Bud are isolated without transport in the desert retreat and are uncertain who they can trust; as in so many of their adventures, they know the only person they can totally rely on is each other. As they dig deeper into the affairs of the Facetors, they uncover more corruption and realise that the danger they are in is growing. Cait is accustomed to using her skills as a psychologist and the power of her extraordinary mind when she is involved in an investigation, but now she also has to dig deep into her childhood memories and her Welsh heritage to confront the Facetor leaders as she attempts to save her husband, herself and other innocent victims from their menace.

The Corpse with The Turquoise Toes is the twelfth mystery featuring Cait Morgan. it is a superb novel, filled with atmosphere and colour, and offers a convincing depiction of the menace of life within a cult seen through the eyes of two logical and sceptical observers. The plot is fascinating, with the tension building slowly to a climax; and the characterisation is excellent. Cait and Bud are engaging protagonists and their warm, supportive relationship lights up the story. This is a page turner, which I wholeheartedly recommend.@
------
Reviewer: Carol Westron