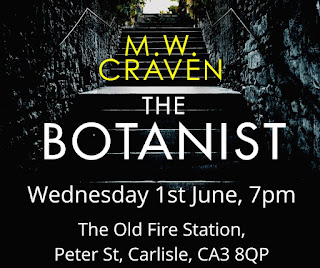 Mike will be put through his paces by interviewer-extraordinaire, Paul Musgrave, who says he won’t ask ‘Where do you get your ideas from?’ but will ask questions that have never been put to Mike before.

As usual, Carlisle’s independent bookshop, Bookends, will be selling hardback copies of
The Botanist and there will be a signing afterwards should anyone want an illegible scrawl in their shiny new book.

Doors open at 6.30 p.m. for a 7 p.m. start.
There will be a full bar.
Entry is FREE, so come along, kick off the Jubilee celebrations in style.

Detective Sergeant Washington Poe can count on one hand the number of friends he has. And he'd still have his thumb left. There's the insanely brilliant, guilelessly innocent civilian analyst, Tilly Bradshaw of course. He's known his beleaguered boss, Detective Inspector Stephanie Flynn for years as he has his nearest neighbour, full-time shepherd/part-time dog sitter, Victoria.

And then there's Estelle Doyle. It's true the caustic pathologist has never walked down the sunny side of the street but this time has she gone too far? Shot twice in the head, her father's murder appears to be an open and shut case. Estelle has firearms discharge residue on her hands, and, in a house surrounded by fresh snow, hers are the only footprints going in. Since her arrest she's only said three words: 'Tell Washington Poe.'

Meanwhile, a poisoner the press have dubbed the Botanist is sending high profile celebrities poems and pressed flowers. The killer seems to be able to walk through walls and, despite the advance notice he gives his victims, and regardless of the security measures the police take, he seems to be able to kill with impunity.

For a man who hates locked room mysteries, this is going to be the longest week of Washington Poe's life . . .

Rattling along at breakneck speed, the latest Poe and Tilly outing sees the pair tackle not one but a sequence of baffling locked room mysteries. All the series hallmarks are here: a fiendish villain, a twisty chase, and, slap bang in the middle of it all, the monumental figure of Washington Poe, acerbic, unstoppable, and positively rubbing his hands with glee. A sinful treat – Vaseem Khan, CWA Historical Dagger-winning author of Midnight at Malabar House

Mesmerising, macabre and murderously funny. The Botanist is M.W. Craven at his sinister best. I couldn’t love this series more – Chris Whitaker, multi-award-winning author of We Begin At The End. 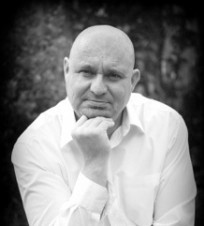 Multi-award-winning author M. W. Craven was born in Carlisle but grew up in Newcastle. He joined the army at sixteen, leaving ten years later to complete a social work degree. Seventeen years after taking up a probation officer role in Cumbria, at the rank of assistant chief officer, he became a full-time author. The Puppet Show, the first book in his Cumbria-set Washington Poe series, was published by Little, Brown in 2018 and went on to win the Crime Writers' Association Gold Dagger in 2019. It has now been translated into twenty-four languages. Black Summer, the second in the series, was longlisted for the 2020 Gold Dagger as was book three, The Curator. The fourth in the series, Dead Ground, was published in 2021 and became an instant Sunday Times bestseller.