‘The Darkening Sky’ by Alison Joseph 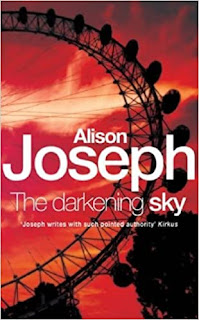 Sister Agnes Bourdillon is currently seconded to St Christopher’s House, a hostel for the homeless. Although warned by Sister Madeleine that the work could be dispiriting, Agnes is pleased that the location of the hostel means that she can stay at her little Bermondsey flat instead of having to return to the community house in Hackney.

On a rainy London night Walker McFaddon, ex-soldier, sometimes known as Andy, already well advanced on a drinking bender, had thrust some crumpled papers into her hands and vanished into the night.  The papers seem to be part of a diary, but the contents make little or no sense to Agnes.

The following day she is informed by Detective Sergeant Russell that Andy McFaddon had been stabbed during a brawl down at Charing Cross. At the funeral she meets his brother, Alastair Brogan, and Trina.  She is perplexed by the appearance of the brother and the rather ornate expensive coffin. Then Michael Cordaro appears, and Agnes learns of their time together when they both served in the Falklands, which is where Andy’s nightmares started and which Agnes now realises relate to the diary.  Slowly Agnes finds herself caught up in the mystery surrounding Andy McFaddon’s death.

Both Agnes and her close friend Athena are at a crossroads, Athena because her boyfriend Nic has been offered a work opportunity in Barcelona and Agnes because she is on the point of taking final vows.  The decision to finally commit is complicated by the recent death of her mother and her inheritance of her house in Provence - as Agnes tries to explain to Athena ‘A nun can’t own a house in Provence’

As Agnes sets out to unravel the complex mystery of Andy McFaddon’s murder, she is beset with her own doubts.  Father Julius tries to explain to Agnes that taking her final vows will not change anything, but will give her structure and a framework within which to live her life; and giving away her house in Provence to the order will simplify her life.  Personally, I couldn’t see it myself - to me being left a house in Provence would be the equivalent of winning the lottery, but then I am not burdened with a vocation.

Agnes is fascinating by the contrariness of her character; on the verge of vows of poverty she is pleased that she has crab pate in the fridge for supper. An excellent entry in this intriguing series.
-----
Reviewer: Lizzie Hayes

Alison Joseph is a London-based crime writer and radio dramatist. She started her career in local radio, and then in television as a documentary director. She is the author of the series of novels featuring Sister Agnes, a contemporary detective nun based in South London. Alison has written about twenty works for radio, including The True Story and also dramatisations of Georges Simenon's Maigret novels. Her latest series features Agatha Christie. Her most recent book is What Dark Days Seen.