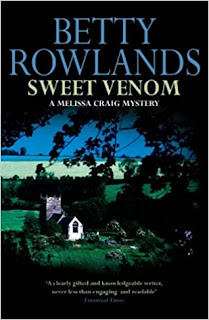 Melissa Craig has settled into Upper Benbury with her new husband and installed her mother Sylvia in the granny annex.  Sylvia is keen to make friends in the village, and as Melissa says the folks in Upper Benbury are on the whole a pretty sociable lot, with the exception of the occupants of Cold Wells Manor - a large rambling place, purchased by the Cresneys, two brothers and their wives.  They do keep pretty much to themselves, although Aiden Cresney, a former barrister is an active member of the parish council, and in his retirement has taken up beekeeping.

When Aiden is found dead in his orchard stung to death by his bees, Melissa pays a call on Aiden’s wife Caroline to offer her condolences and finds her in a dreadful state.   She also meets Quentin Cresney and senses the tension between Caroline and her brother-in-law. In all says Melissa ‘there’s quite a creepy atmosphere in that house.

The coroner’s pronouncement of  Death by Misadventure doesn’t totally quell the gossiping in Upper Benbury, and when a second family member dies in a similar manner Melissa does a little investigating on her own, and when she attends the monthly meeting of the local beekeepers association she discovers some interesting facts - particularly from the speaker Doctor Harold Finn on the subject of ‘The Chemistry of Beekeeping’ - now where has she heard that name before?

Betty Rowlands (1923-2020) burst on to the crime scene by winning the Sunday Express / Veuve Clicquot Crime Short Story of the Year Competition. Her success continued with the highly acclaimed Melissa Craig mysteries. She was an active member of the Crime Writers' Association and regularly gave talks and readings and served on panels in crime writing conventions.