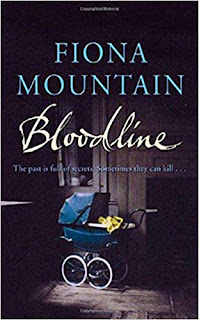 Genealogist Natasha Blake accepts a commission from Charles Seagrove to investigate and draw up the family tree of his granddaughter's boyfriend John Hellier.  She turns up some not so pleasant things in the Hellier lineage - one being that Alice Hellier was hanged in 1853 for murder. However, after a couple of further hiccups the Helliers seem to have come good in that Alice's grandson became a blacksmith and his son a farmer. She would have liked to have spent more time in investigating the circumstances of the murder, but a week had been stipulated by her client and that week is now up. Her client is satisfied with the result, indeed so much so that she is invited to a garden party at his home Shadwell Manor Farm on the following Sunday to celebrate his son Richard's birthday. The day doesn’t end well.

Then she receives an anonymous note stating that 'Cinderella is in the Bluebell Woods at Poacher's Dell', but Natasha is more interested in another note she has received accompanying an airline ticket from her boyfriend in Canada. Should she go or not?

After the situation that irrupted at the birthday celebration Natasha feels that she should acquaint John Hellier with the family tree she had produced but feels obliged to inform her former client Charles Seagrove of her intention to do so. Directed to the garden where she was told she could find Charles Seagrove, she funds him lying dead.

Richard Seagrove feels certain that his father's death is connected to the research done by Natasha, and commands her to delve further back. Although his attitude is  overbearing, she is interested herself. And so, Natasha is drawn into a family of secrets - secrets that stretch back through two world wars to Christmas Day 1914.

To say this is a fascinating book is an understatement. I really loved it. A real puzzle. On the surface an attractive middle class English family, but nothing, and no one is what they appear. Brilliantly crafted, this is a real mystery, I wanted to know the end, but I didn't want the book to finish.  Definitely on my top ten reads of 2004.
------
Reviewer: Lizzie Hayes
The first book in the series is Pale as the Dead

Fiona Mountain grew up in Yorkshire, then moved to London where she worked at the BBC for nine years as a press officer, primarily for Radio One. She now lives in the Oxfordshire countryside and runs a PR agency. She is married to composer Tim Mountain and has a son, Daniel.