‘The Coffin Trail' by Martin Edwards 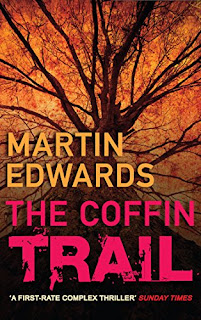 When their holiday abroad fails to materialise, Daniel Kind takes his partner Miranda on holiday to the Lake District where he once holidayed with his father. Unexpectedly Miranda falls in love with the area and in particular with Tarn Cottage. Following an unpleasant incident with her boss Miramda states that she is tired of their London life and suggested that they sell up in London and move to Tarm Cottage. The relationship between Daniel and Miranda is in its early stages and the one thing that so attracts Daniel to her, is her spontaneity. So, Daniel, an Oxford Don and historian who is never spontaneous, is carried away with her enthusiasm and they buy the cottage, give up their jobs and move to the Lake District.

It all sounds pretty idyllic except that Daniel has failed to inform Miranda that the cottage they have bought was the home of Barry Gilpin who was suspected of the savage murder of a young tourist whose body was found on an ancient pagan site on the fell known as the Sacrifice Stone. Barry who had Asperger's Syndrome was found dead that same night at the bottom of a quarry.  With the prime suspect dead, the case was closed.  But Daniel had played with Barrie and counted him as a friend, and he cannot believe that Barrie had done this terrible thing.

Daniel believes that a historian is a detective and starts asking questions about the circumstances surrounding the murder, but no one takes kindly to his investigations, not the villagers, and not Miranda. Simultaneously with what Miranda calls Daniel's stirring,   DCI Hannah Scarlett,  who worked with Daniels father Ben Kind when he was the Inspector in charge of the murder for which Barry was blamed, has just accepted a job to re-open some unsolved Cold Cases, and out of the blue the task force receive an anonymous call about the murder.

The book is rich in characters and the exploration of relationships. Daniel is keen to learn more of his father, who had left his mother and his sister Louise for another woman, severing all contact with his children.  Also Hannah's relationship with bookseller Marc Amos who has a jealous nature. And Tash and Simon Dumelow who have taken on the mantle of the local Squire. In such a tight knit community if there is some doubt as to the guilt of Barry Gilpin, then who did it?

This was one book where I appreciated a prologue, normally I do not see the point of them, but in this book, it worked really well, and was I think very necessary to the story.

To my mind this is Martin's best book to date and I heartily hope that this is the start of a series as although the murder was dealt with in a very satisfactory way, I feel that there is much to discover regarding the relationships of some of the characters involved.  Very highly recommended.
-----
Reviewer: Lizzie Hayes
Martin Edwards is the author of the Harry Devlin books of which there are seven in the series. He has also written apsychological suspense novel entitled Take My Breath Away, and has edited several short story collections

Martin Edwards was born 7 July 1955 at Knutsford, Cheshire and educated in Northwich and at Balliol College, Oxford University, taking a first-class honours degree in law. He trained as a solicitor in Leeds and moved to Liverpool on qualifying in 1980. He published his first legal article at the age of 25 and his first book, about legal aspects of buying a business computer at 27, before spending just over 30 years as a partner of a law firm, where he is now a consultant. He is married to Helena with two children (Jonathan and Catherine) and lives in Lymm.  Martin has now written 22 novels. He is a member of the Murder Squad a collective of crime writers.  In 2007 he was appointed the Archivist of the Crime Writers Association and in 2011 he was appointed the Archivist of the Detection Club. He is a former chair of the Crime Writers’ Association, and since 2015, he has been President of the Detection Club. For more information visit: