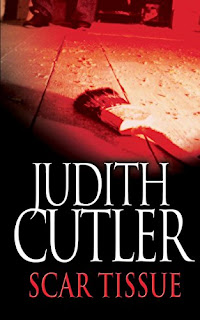 Caffy Tyler is enjoying her new life in Kent working as a decorator for Paula Pots.  She has made new friends and is beginning to really believe that she has left her old life behind her, except of course for the emotional and physical scars that are still with her.  Paint pot in hand, up a ladder, she is painting a bedroom window frame when she espies a dead body lying on a bed. As if that wasn’t bad enough she runs into her drug-dealer ex-boyfriend when she is shopping in the local supermarket.

The police seem particularly unhelpful about the body, probably coloured by the fact that when they return to the house there is no body. But Caffy knows what she has seen and so she has to make a choice - does she run again, or does she stand and see it out?  Not an easy decision as the ex-boyfriend is liable to hurt anyone connected with her and Caffy is loath to involve her new friends in the sort of wars between drug-barons that she lived with back in Birmingham.

As she ponders whether to go or stay, matters take a distinctly unpleasant turn.  Not sure who she can trust, she contacts her friend Todd who is now a police officer, but he doesn’t seem overjoyed to help her.

Caffy is a mixture of vulnerability and tough kid. She’s seen a lot and certainly been through a lot, but she still retains hope that she will eventually be loved, but without believing it can happen.  This book is rich in characters - particularly Paula who I am certain has a story to tell.

This is the first book in a new series, and despite being an excellent mystery with some good twists, I feel there is much more to learn about Caffy and I eagerly await the next episode in her life.
-----
Reviewer: Lizzie Hayes