‘Music of the Night’ The Crime Writers Association. Edited by Martin Edwards. 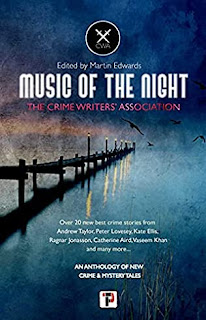 This cracking collection from members of the Crime Writers Association focuses on crime with a musical twist. As you’d expect, every story is enjoyably clever, with a host of interesting characters along the way.  Antony M Brown has a serial killer who recreates record covers in The Melody of Murder. In Dea Parkins’ The Sound and the Fury, music ramps up a woman’s revenge. Several of the stories feature young people: Abi Silver’s observant young narrator senses undercurrents at the Guide and Scout camp and takes a hand in solving the mystery in Be Prepared. A cub reporter sent to cover a school concert gets more than he bargained for when a famous singer turns up in Andrew Taylor’s Wrong Notes. Not a note by Kate Ellis is narrated by a reluctant schoolgirl whose mother’s determined she’ll be a pianist.

Naturally, some stories focus on musical instruments: Alison Joseph’s A Sharp Thorn begins with a phone call from an unknown dying man, and features a very special harpsichord. Violin-ce by David Stuart Davies is told as a dialogue between a musician and the thug who wants his Stradivarius, and there’s also a  fiddler in the moving The Watch Room, by  Neil Daws, a story of a derided brother who takes a terrible revenge..

Several of the stories use interesting forms. Art Taylor’s Love me or leave me – a Fugue in G Minor gives notebooks, reports and texts to build up the mind of a murderer. Cath Staincliffe’s short, clever Mix Tape tells a story in record titles. L C Tyler’s His Greatest Hit is the story of the death of a rock star’s wife constructed as a song. 4 x 3.3 by Ragnar Jonasson is flash fiction with a soundtrack.

There are a good number of classic spot-the-clues detections. A record collector’s murdered in The Scent of an Evening by Brian Price. The Last Green Bottle, an outing for Catherine Aird’s police duo Sloan and Crosby, involves a murder in the past, and there’s a murder at a fancy dress Halloween party in Some other Dracula by Christine Poulson. Leo McNeir’s couple on a barge holiday hear about a local murder in Requiem. Paul Charles’ The Ghosts of Peace has the death of a former band member, with the chief suspect on stage in front of 1,287 witnesses. Annie Lennox helps DI Warren solve the apparent suicide of the wife of a would-be MP in No More ‘I love you’ by Paul Gitsham. Vaseem Khan’s murder of a jazz musician in Bombay’s smartest hotel throws up several suspects suffering from Bombay Blues.

Naturally there are also twists in the tales. A murderer has the tables turned on him in Taxi! by Chris Simms. A wealthy passer-by becomes obsessed with a street singer in Jason Monaghan’s A Vulture sang in Berkley Square. Martin Edwards’ The Crazy Cries of Love has an elderly man becoming fond of his new neighbours, and Maxim Jakubowski’s journalist narrator meets a women with a habit of being in on musician deaths in Waiting for Cornelia. Peter Lovesay’s Grandpa’s favourite tune leads to family discoveries in And the Band played on. A composer just wants to get this comission finished in A Death in Four Parts by Shawn Reilly Simmons.

A superb collection in a variety of styles which just shows how many different stories some of crime writing’s finest can produce from the simple theme of music and murder. Highly recommended.
------
Reviewer: Marsali Taylor

Martin Edwards was born 7 July 1955 at Knutsford, Cheshire and educated in Northwich and at Balliol College, Oxford University, taking a first-class honours degree in law. He trained as a solicitor in Leeds and moved to Liverpool on qualifying in 1980. He published his first legal article at the age of 25 and his first book, about legal aspects of buying a business computer at 27, before spending just over 30 years as a partner of a law firm, where he is now a consultant. He is married to Helena with two children (Jonathan and Catherine) and lives in Lymm. He is a member of the Murder Squad a collective of crime writers.  In 2007 he was appointed the Archivist of the Crime Writers Association and in 2011 he was appointed the Archivist of the Detection Club. He is a former chair of the Crime Writers’ Association and since 2015, he has been President of the Detection Club.