‘Scare the Light Away’ by Vicki Delany 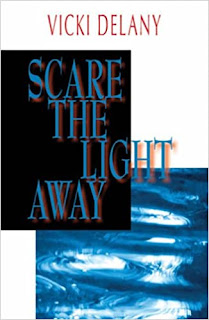 After a lapse of thirty years, Rebecca McKenzie returns to her small home in Northern Ontario for the funeral of her mother.  Rebecca is the vice-president of a successful bank and recently widowed.  It is intended to be as short as visit as possible, but things have changed; she now has two nieces, daughters of her sister Shirley, the latter who is distinctly hostile towards her.   And most surprising her brother Jimmy is in residence at her grandparents’ old house, complete with wife Aileen. Although Rebecca instinctively likes Aileen, she is very suspicious of her brother Jimmy, the black sheep of the family, known for his womanising, who has served time in prison.

Whilst staying with her father she discovers three tea chests of diaries - kept by her mother and chronicling her life from the time she met Bob, her husband, until the present day. Reading the diaries, Rebecca slowly comes to discover her mother’s unhappiness since she came to Canada as a war bride following the end of the Second World War.

When a young woman goes missing, suspicion immediately falls on Jimmy, and tension in the town rises to direct action against him. The diary extracts are interspersed throughout the book proving the background to the complex relationships between the family members.  A marvellous debut novel that really tears at your heart and mounts to a stunning climax.
------
Reviewer: Lizzie Hayes 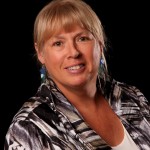 Vicki Delany was born in Canada in 1951. She began her career as a Sunday writer: a single mother of three high-spirited daughters with a full-time job as a computer programmer. Sunday afternoon was - and at that, only now and again - the only time she had to spend all by herself, with a single candle on her desk for a bit of atmosphere, a Bruce Springsteen tape in the tape deck, and a nice cup of tea at her elbow. When she felt like really letting loose, the tea might have turned into a glass of wine.